A Hands-On Guide to the Sinn 356 Pilot Chronograph Watch 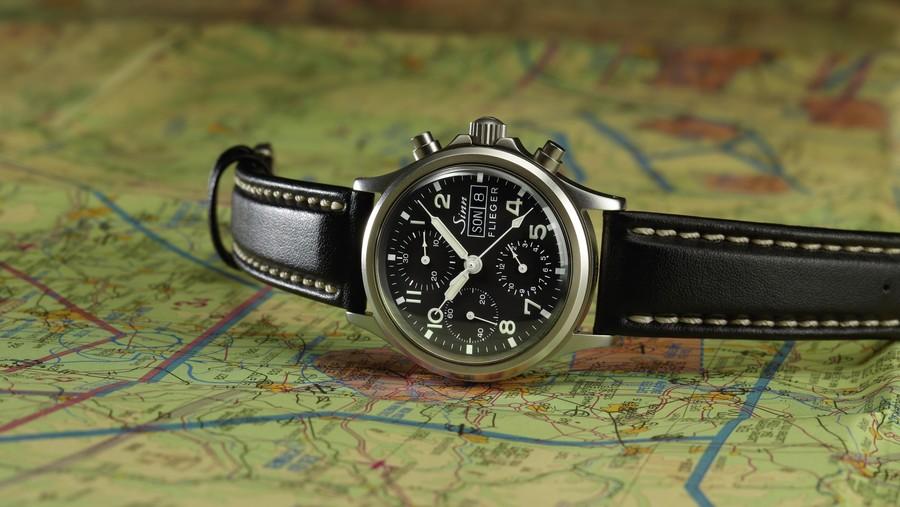 Sinn Watches has a reputation for designing quality timepieces with an innovative mindset. In its almost six-decade-long run, the company has achieved massive success with its countless watches. One of its sensational watches currently in production is the ‘Sinn 356 Pilot Chronograph Watch’. In this article, we’ll take a closer look and spill all you need to know about this watch — from its origins and specifications, down to the process of changing its straps.

A Brief Look at Sinn Watches

In 1961, Helmut Sinn, a former pilot and blind flight instructor, founded the watch company ‘Helmut Sinn Spezialuhren’ in Frankfurt am Main, Germany. At the time, Sinn wanted to focus on producing quality pilot chronographs and navigation timepieces. Since then, Sinn Watches has reached great heights with its timepieces. Some of its watches have even gone to space, a feat most people can only dream about.

In 1994, a new era unfolded for Sinn Watches when new management came into the picture. Lothar Schmidt, a certified engineer, acquired the company and made major strategic decisions and reorganisation to improve the company’s level of technological expertise. Under the leadership of Schmidt, the company began to move towards a more innovative mindset. Since then, Sinn Watches has continuously produced top-notch, innovative timepieces that really made a mark in the industry.

This series takes inspiration from the Sinn 256 Pilot Chronograph which was developed with the Japanese market in mind. Despite Sinn Watches releasing this collection in 1996, the design isn’t at all dated and still gives off a contemporary feel. This is due to its clean aesthetic which really exudes simple elegance. The design focuses on delivering accurate reading and does not distract from the essentials. Everything is carefully designed to ensure a quality experience for its wearers.

In terms of watch sizes, the Sinn 356 Pilot lies on the average side. At 38.5mm in diameter, this watch is appropriate for those who have wrists that are six to seven inches in circumference. The case is 15.5mm thick and has a band lug width of 20mm. It’s important to note the width of the band lug if you’re planning on replacing the strap since you’ll have to make sure the new one fits. And for those who are particular about the weight, the watch weighs 71g without the strap.

The Sinn 356 Pilot Chronograph Watch has the classic stainless steel case, which is bead-blasted to achieve a handsome finish. The stainless steel caseback and crown are screw-down for maximum water resistance. The watch also has two buttons above and below the crown, which are used for the watch’s chronograph feature. Lastly, the case has a sturdy acrylic glass crystal protecting the dial.

The watch has a pretty handsome matte black dial with a bunch of cool features. Being a chronograph watch, the Sinn 356 Pilot has three sub-dials that help measure the time for the stopwatch. In terms of additional features, it also has a date window and a day of the week window. The Sinn 356 Pilot Chronograph has fairly large, white Arabic numerals that create a great contrast against the dark dial for better visibility. However, the numerals for the 3, 6, 9, and 12 o’clock positions are missing due to the positioning of the sub-dials and windows. These numerals, along with the three watch hands — hour, minute, and second — are coated with luminescent colour to provide optimal readability at night.

The Sinn 356 Pilot Chronograph Watch runs on a self-winding movement. It has 25 bearing jewels and produces an average of 28,800 semi-oscillations per hour. The watch also has a seconds stop function and is anti-magnetic.

In terms of water-resistance, the Sinn 356 Pilot does pretty well. It is pressure-resistant up to 10 bar or 100 metres. What does this mean? Well, when it comes to daily use, this watch can withstand splashes, rainfall, handwashing, and even a shower. But it doesn’t stop there! You can also take this watch with you on a casual swim or scuba diving. Watches with 100 metres of water-resistance, however, have their limits. This watch wouldn’t be appropriate for deep-sea diving or more extreme water activities. So, it’s best to just stick to recreational swims when it comes to the Sinn 356 Pilot.

How to Set the Time

First off, we must discuss the different crown positions. For the Sinn 356 Pilot Chronograph Watch, the crown is screwable, so in its normal position, it is locked. To wind the watch or set it, you must first loosen the crown. You do this by turning the crown counter-clockwise. This is position one.

For setting the time, you must pull the crown out to position three. After loosening the crown (position one), pulling it out to two clicks will put it in position three. Putting the crown in this position pauses the motion so that you will be able to set the time precisely. When changing the time, you have to make sure that the date changes at midnight instead of midday. Sinn Watches also recommends moving the hands a little bit past the target minute markers and just adjusting it backwards. Once you put the crown out of position three, the movement will automatically restart. Of course, don’t forget to refasten the crown to its normal position.

How to Set the Date

For this watch, there is a quickset function for the date and the day of the week. This is done by pulling the crown out to position two. You will know the crown is in position two if there is one click after pulling it from position one. While in position two, turning the crown clockwise will move the date forward. Do this until the desired date is displayed on the date window. Turning the crown counter-clockwise, however, will change the day of the week. Sinn Watches warns against using the quickset function between 9PM and 3AM. Doing so might lead to damage in the movement since during this specific period, the gear wheels that are used for changing the date are engaged.

How to Use the Chronograph

Now that we’ve discussed the stopwatch hands, we’ll now be able to know where to look. The next thing we need to know is how to use it. Now, on the watch, there are two buttons: one above the crown and the other below it. Pressing the upper button starts the chronograph measurement. When you press the same button again, it’ll pause the measurement. If you want to resume the measurement, you’ll have to press that same button again. This is particularly useful for recording cumulative time. Once you’re done using the chronograph, this is when the second button comes in. While pressing the upper button after the chronograph has started will stop the time, pressing the lower button will reset it, putting all hands back to zero.

How to Change the Strap

For the Sinn 356 Pilot Chronograph Watch, you can swap out the strap for another Sinn strap as long as it fits. In fact, for this particular model, there are a lot of strap options from leather, silicone, and solid bracelet. The leather strap option, in particular, offers so much variety in terms of the type of leather and colour. So, if you’re planning on getting a different leather strap, here’s how to assemble it.

First, we have to emphasise the importance of handling your watch with care. Before attaching the strap, make sure to lay down a soft cloth on an even surface. Then place your watch dial face down on the cloth. Take the strap and fold over the shorter side. The metal hoops should be pointing to the left. From left to right, bring the longer side through the watch’s spring bars. Next, take the shorter side and fold it over to the right, over the back of the case. Now, take the longer side and bring it through the hoops on the shorter side. Tighten and then carefully strap it.

How to Adjust the Strap Length

Sometimes, a watch strap can be too long or have a fit that just doesn’t feel right. Thankfully, there are ways to adjust the strap so that it’ll fit better on your wrist.

Before trying to adjust the length of a solid bracelet, you should first determine the length of both sides. Ideally, each side should have the same number of links to get maximum comfort. However, if that’s not possible, then it should be the top strap that’s longer.

A similar process is followed whether you’re removing a link or adding to it. First, go to the bracelet link that you will either remove or add to — depending on whether you want to shorten the bracelet or lengthen it. Turn it to its side so you can loosen the screws on the link to be removed or added to. If you want to shorten the bracelet, remove this link. However, if you want to lengthen it, you should insert an additional link or more to the link whose screws you have just removed. After, add a small drop — and we mean just a small drop and no more — of thread locker to the bracelet screw thread. Once done, screw it tightly and you’re finished.

Metal bracelets aren’t the only type of strap that you can shorten. You can also actually adjust your silicone straps. The first thing you’ll have to do is remove the strap from its clasp. To do this, push the spring bar out of the clasp using the band replacement tool’s pointed end. When the fastener is open, you will be able to easily remove the other side of the spring bar. Once done, the silicone band will be freed from the clasp.

The next step is to cut the silicone band. Get a knife or a pair of scissors and identify the point where you’ll be cutting. To know where to cut, look at the silicone band’s side. There will be a bunch of metal pins on the side. Make sure to cut in the middle of two pins.

It’s also important to note that you should be cutting the strap symmetrically. This means whatever length you cut off on one side, you should also cut off on the other. Sinn Watches also advises cutting it starting from the clasp and moving outward little by little to avoid cutting off too much. Another recommendation is to try out the length from time to time to make sure it fits right. For reference, cutting off a length of one metal pin on each side would result in a difference in length of 10mm. Once you have the desired length, remove the first metal pin of each side. Replace these with the spring bars and attach the clasp to the band.

Sinn Watches is known for producing amazing and innovative timepieces of quality craftsmanship, and the Sinn 356 Pilot Chronograph is no exception. This series was carefully made to ensure an accurate reading. It focuses on the essentials, and cuts down the distractions, opting for a much cleaner aesthetic. It is simple yet captivating and is really worth the price.

If you’re interested in learning more about the other watches Sinn has to offer, check out our ultimate guide on Sinn Watches.