In 1963, his great-grandson, Jack William Edouard Heuer, introduced the Carrera collection and captured the spirit of TAG Heuer for the next 50 years. Inspired by motor racing, the collection boasts of impressive pieces for sports. It is expected to continue its journey forward by bringing state-of-the-art functions in sports timekeeping.

Now, the TAG Heuer Carrera is the most-coveted wristwatch collection amongst the bravest car drivers and sporty fellows for its precision and design. 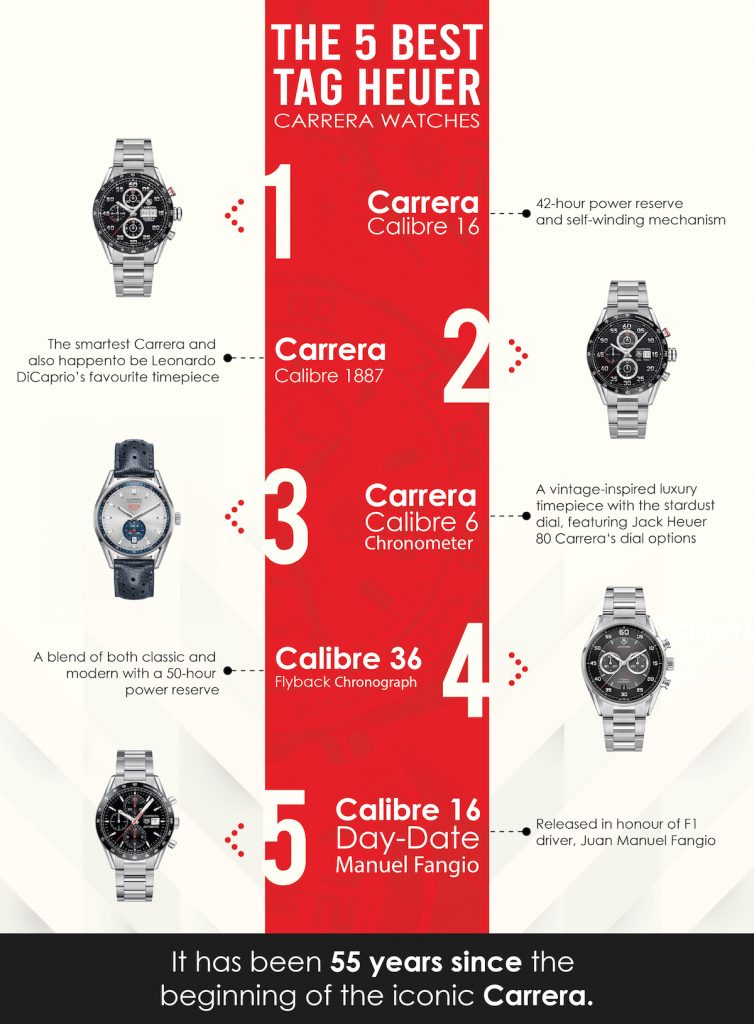 Leonardo DiCaprio is a fan of TAG Heuer’s Carrera Chronograph. Likewise, Brad Pitt has also worn one of the Carrera models on his wrist in a few events. In fact, many of Hollywood’s elites seem to favour the Swiss brand. The likes of Matt Damon and Uma Thurman have also been seen wearing a piece from TAG Heuer.

Apart from over 150 years of greatness and more than 170 stores worldwide, the brand is popular based on 2 simple factors:

Firstly, TAG Heuer cemented its position as one of the best makers of amazing sport luxury watches. First designed back in 1963, the Carrera became one of the watchmaker’s most beloved creations. In fact, it broke the traditional watchmaking process back then!

Secondly, TAG Heuer ensures quality production, precise movements, and utmost comfort for the wearer with every piece that they design and release.

The Advent of Carrera 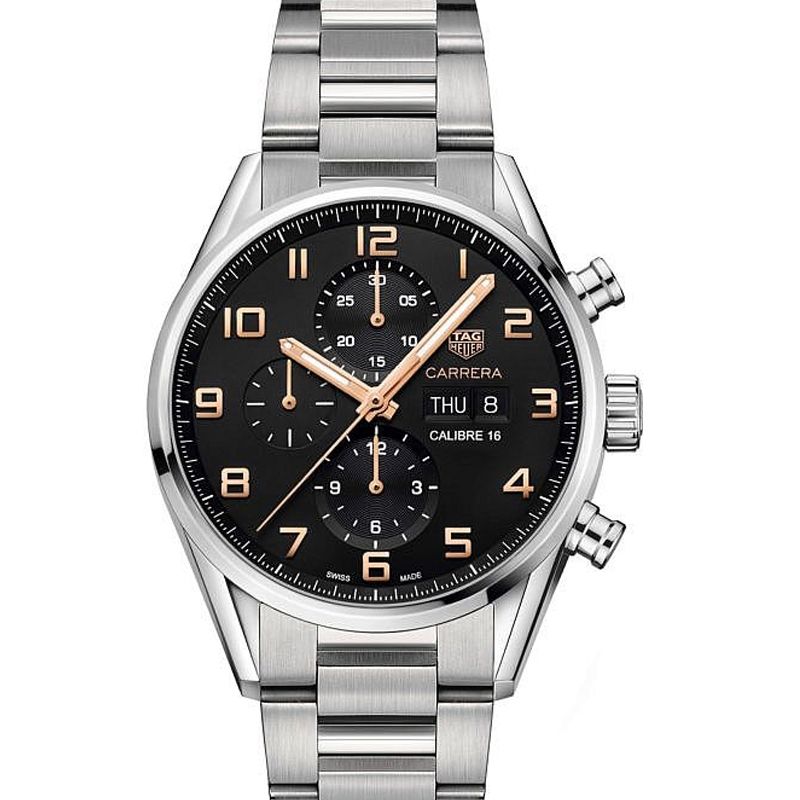 The word “Carrera” means “road” or “race”. The Carrera collection from TAG Heuer takes its name from the Mexican Carrera Panamericana race.

The TAG Heuer Carrera hit the market in 1963 with impressive sport chronograph watches. Currently, it has been 55 years since the beginning of the iconic Carrera. Moreover, it happens to be one of the most recognised iconic timepiece collections which has set a benchmark in chronograph watches.

The Carrera models are always waterproof and anti-magnetic. Additionally, the markers on the dial are always well-spaced to improve readability.

Over the years, the Carrera range incorporated the Calibre 16’s Valjoux movement, automatic movements, Calibre 360, and different dials, along with date variations, into their timepieces. Today, this range is both TAG Heuer’s proud past and bright future.

The TAG Heuer Carrera collection stays as the head in luxury sports timepieces for racing and other sports.

5 Things You Need To Know About TAG Heuer Carrera 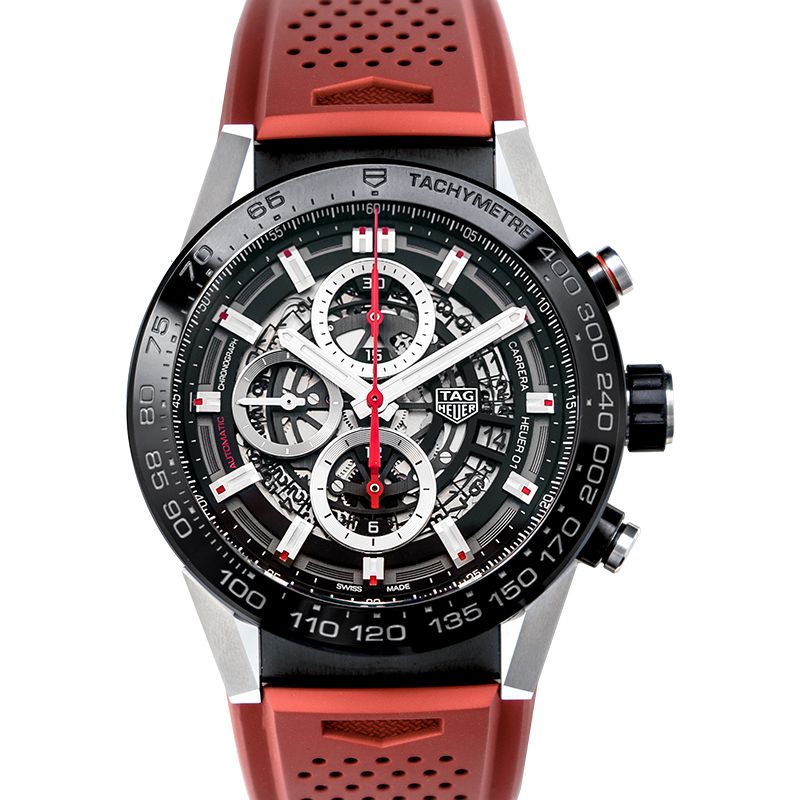 1. The TAG Heuer Carrera Chronograph is the symbol of the company’s legendary heritage in the history of motorsports. Watchmakers at TAG Heuer created it with racing fans and drivers in mind.

2. The Carrera series was first launched in 1963 with the advent of the 60s classic motor-racing inspired chronograph. Altogether, until 2013, ten generations of Carrera have been identified.

3. There are 6 distinctive TAG Heuer models that are Carrera-related but not quite Carreras.

4. In 2018, TAG Heuer won one of the top awards in the Red Dot Design Award as recognition for their product design.

This is a superior and precise watch powered by Intel Atom, a super processor, and operated on Android Wear. Along with that, the watch also comes with connectivity functions such as Bluetooth, music, Wi-Fi, GPS, and so much more.

The TAG Heuer Carrera Tête de Vipère Chronograph Tourbillion Chronometer is a limited edition piece. With only 155 pieces produced, it retails for AU$26,750.

5 of the Most Iconic TAG Heuer Carrera Watches

The TAG Heuer Carrera Calibre 16 Chronograph comes with either a blue or black ceramic bezel. The chronograph hands are a bright red colour. Along with a power reserve of 42 hours, the watch also features an impressive self-winding mechanism and chronograph movement. The avant-garde styled watch is presented on a 43 mm wide case made of Grade 2 Titanium.

Keeping the technicalities aside, the Carrera Calibre 1887 is the smartest Carrera and also happens to be Leonardo DiCaprio’s most favorite timepiece. In fact, he has worn the watch’s newer version — with the comfortable brown alligator strap and rose gold hours — in almost every event he has attended.

The Carrera Calibre 6 Chronometer is a vintage-inspired luxury timepiece with the stardust dial, featuring Jack Heuer 80 Carrera‘s dial options. It comes with a COSC Certified chronometer, making it quite a great timepiece for athletes.

Inspired by the Haute Horlogerie Carrera Mikrograph, the watch comes with a superior power reserve of over 50 hours. In fact, football legend Cristiano Ronaldo was even seen wearing this timepiece.

The watches from the TAG Heuer Carrera collection have stood the test of time. Its watches remain valuable and beloved to this day. The brains behind the brand have worked tirelessly to provide only the best for racing fans and sporty gents. Aside from the five mentioned above, which other timepieces from the collection do you admire?