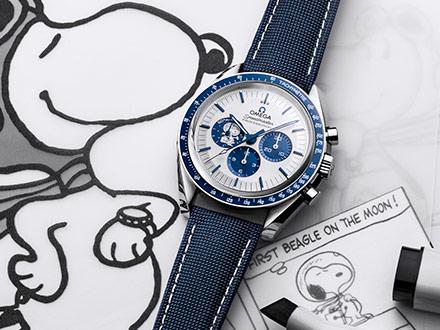 Ask any watch enthusiast about Omega and they can tell you how capable this Swiss watchmaker is at designing top-notch tool watches. For instance, its iconic Omega Speedmaster Professional “Moon Watch” is known for being the first watch to ever land on the Moon in July 1969, which also led to Omega being formally recognised by those in the astronomy field. As a result, NASA awarded Omega the Silver Snoopy Award in 1970, honouring the watchmaker for its contributions to space explorations.

In celebration of the 50 years since it was awarded the Silver Snoopy Award, Omega has introduced a new Omega Silver Snoopy Award model: the Omega Speedmaster “Silver Snoopy Award”  Reference 310.32.42.50.02.001. Through this watch, the brand perfectly combines animation with watchmaking art, resulting in a very unique, exquisite style.

Almost all watch enthusiasts probably know Omega’s role as the first watchmaker to have a watch that was brought to the moon. However, what some may not be aware of is that Omega also played a huge part in the Apollo 13 mission. As part of this mission, every member of the Apollo 13 crew was equipped with an Omega Speedmaster “Moonwatch” piece. This timepiece played a crucial role in helping the astronauts safely get back to Earth after one of their oxygen tanks exploded.

Omega’s role in the safe return of the Apollo 13 crew was acknowledged and applauded by many in the space community. This led to NASA awarding Omega with the Silver Snoopy Award back in 1970, in recognition of the brand’s contributions. Since then, Omega has released a number of Omega Silver Snoopy Award watches, as a celebration of this honour that it received.

The History of the Omega Silver Snoopy Award

Over the years, Omega has introduced a number of Speedmaster models based on the Apollo missions and aeronautics exploration as a whole. This, of course, includes models that act as a tribute to the Silver Snoopy Award as well.

In 2003, Omega released its first timepiece related to the Silver Snoopy Award: the Omega Speedmaster Snoopy Award Ref. 3578.51.00. This is a timepiece that looks extremely similar to the regular Speedmaster Professional Moonwatch. The only difference between the two models is that the Omega Snoopy version features a colourful logo of Snoopy the beagle in a spacesuit against a starry night sky. This logo is printed on both the watch’s small seconds counter and its caseback. As a limited edition model, only 5,411 pieces of the Omega Speedmaster Snoopy Award Ref. 3578.51.00 were produced.

Two years later, the second Snoopy watch was released, in line with the 45th-anniversary celebration of the Apollo 13 space mission. It came in a similar case and movement as the first Omega Snoopy model, albeit with a stunning, refined all-white dial. It also showed off a handy black tachymeter bezel made of ceramic and a caseback inscribed with a silver Snoopy logo. This watch was yet another limited edition piece and was only available in 1,970 copies, making it a truly rare Omega Silver Snoopy Award model.

Most recently, in 2020, Omega has released its newest version of the Omega Speedmaster Silver Snoopy Award Ref. 310.32.42.50.02.001 as a celebration of the 50 years since it received the Silver Snoopy Award. This watch is instantly recognisable as a Silver Snoopy piece — thanks to its robust, clean, and accurate details. Like the older Omega Snoopy watches, this watch offers top-notch quality, from its premium materials to its glamorous dial.

Right off the bat, you will recognise the Omega Speedmaster Silver Snoopy Award Ref. 310.32.42.50.02.001 as a member of the Speedmaster collection. It comes in a sleek, robust 42mm stainless steel case that simply exudes professionalism. This is an ideal watch size for anyone seeking the perfect modern timepiece, as it is neither too big nor too small, fitting just right on wrists of most sizes. This case is also extremely resistant to scratches and impacts, bolstering the durability of the 2020 Omega Silver Snoopy watch.

Like the older Omega Snoopy watches, this timepiece also shows off the same twisted “lyre” lugs, with a combination of polished and brushed surfaces. This interplay of finishes, coupled with the well-polished case, gives the 2020 Omega Silver Snoopy Award an impeccable, eye-catching lustre.

On the right side of the 2020 Omega Silver Snoopy Award’s crown, you can also find a chunky crown surrounded by two stout pushers, much like the classic Speedmaster Moonwatch. While the crown shows off knurled edges which provide wearers with a better grip, the two pushers flaunt smooth, polished sides.

Finally, the 2020 Omega Silver Snoopy Award also stands out for using a sapphire crystal to protect its dial, as opposed to the Hesalite crystal adopted by most Speedmaster timepieces.

The 2020 Omega Silver Snoopy Award can honestly be described in just one word: handsome. And a big contributor to that is its stylish dial. It effortlessly blends clean white and deep blue tones to create a very visually appealing watch face.

This dial shows off a soft, silver-white finish. It is adorned with rectangular hour markers in blue and slender, sweeping sword hands, and a simple minute track with black stick indices on its rim. At the top of each hour marker, you can find a dot-filled lume. Together with the watch’s lume-coated hands, these dot indices help illuminate the watch face in the dark, allowing for optimal legibility.

Towards the centre of the dial, Omega has placed three deep blue sub-dials, which stand out clearly against the white background. These submerged sub-dials serve as the 12-hour, 30-minute, and small seconds counter. Like the other Omega Snoopy watches, this 2020 Omega Silver Snoopy Award stands out with the Snoopy character that is engraved on its small seconds medallion at 9 o’clock. On top of spacesuit Snoopy, the words “50th Anniversary” are embossed on the sub-dial. On top of acting as a commemorative element, this quirky design adds a playful, adorable edge to the 2020 Omega Silver Snoopy Award.

The caseback of the 2020 Omega Silver Snoopy Award is also worthy of mention. Instead of having a plain stainless steel caseback like so many watches have, this watch shows off a gorgeous, detailed view of space on its caseback. It depicts an image of the moon in space against a starry night sky, with an Earth disc that rotates once every minute, in sync with the timepiece’s small seconds hand.

Towards the top of the sapphire crystal, you can also find an animation of Snoopy travelling in a Command and Service module. This is accompanied by an engraving of U.S. President Roosevelt’s famous quote, “Eyes on the stars”.

Powering the 2020 Omega Silver Snoopy Award is the powerful in-house Omega Calibre 3861. This master chronometer is the newest, most updated version of the iconic Moonwatch 1861 movement. This movement is a genuine innovative marvel of the brand. It took Omega four years to create a calibre movement that could achieve the master chronometer certification while also preserving the slender dimensions of the Moonwatch 1861 movement, and the Omega Calibre 3861 was the result.

Held together by 26 jewels, the Calibre 3861 is a hand-wound movement with a  substantial power reserve of 50 hours. In addition, as a master chronometer, it has an outstanding accuracy rate of 0/+5 seconds per day. It also possesses increased resistance to shocks and can withstand magnetic fields of up to 15,000 gausses.

Omega finishes off the 2020 Silver Snoopy Award with a rugged blue fabric strap. On the underside of the strap is a black rubber backing, which helps make the strap more supple and sturdy, while also providing greater comfort against your wrist.

The Omega Speedmaster Silver Snoopy Award Ref. 310.32.42.50.02.001 can be purchased at Omega’s online stores, physical stores, or retail shops for approximately $9,000 USD. This is quite a fair price for such an outstanding luxury watch. In addition, the 2020 Omega Silver Snoopy Award offers a five-year warranty and comes in its own Apollo 13 presentation box.

This Omega watch is presented in a 44.25mm black, scratch-resistant ceramic case, coupled with slanting, bevelled ceramic lugs and a smooth black fabric strap. Fixed on top of its case is a black ceramic tachymeter bezel which matches perfectly with the rest of the case. Despite its bulkier size, this watch is actually quite light, thanks to its lightweight ceramic composition.

Complementing the rest of the watch is a glamorous black dial, which shows off a simple chronograph layout, as befitting a Speedmaster piece. This dial comprises luminous rectangular hour indices, slim silver sword hands, a date complication at 6 o’clock, and two sub-dials. These two black sub-dials serve as the 12-hour and 60-second counters.

Driving this Omega Speedmaster piece is a top-notch Omega Calibre 9300. Equipped with a 50-metre water resistance capacity, this timepiece can easily survive a few splashes and showers. In addition, it can last for up to 60 hours when fully wound.

Another excellent alternative to the 2020 Omega Silver Snoopy Award is the sophisticated Breitling Professional Chronospace Ref. A2336035/BA68. This Chronospace watch is housed in a 46mm stainless steel case, coupled with thick lugs and a stylish mesh bracelet. It is fitted with a bi-directional rotating slide rule bezel, which shows off rugged bottle cap edges that provide wearers with an easier grip.

Standing out against the all-silver exterior of this Breitling watch is a jet-black dial that is packed full of complications. It contains thick, square-shaped hour indices, broad sword hands, and a bold, pronounced Arabic numeral marker at 12 o’clock. All of these hands and markers are generously coated in lume for excellent visibility even in the dark. Slotted between the 4 and 5 o’clock markers is a small date display. This watch also has a chronograph layout, with three sub-dials outlined in silver for the 30-minute, 12-hour, and 60-second counters.

Underneath this busy watch face is a Swiss Calibre 23. Based on the ETA/Valjoux 7753 movement, this calibre offers a solid 42-hour power reserve. Furthermore, it is equipped with an excellent 200-metre water resistance rating.

Omega is home to numerous sought-after tool watches in horology. Its commitment and dedication to space exploration, and in particular, its contributions to the Apollo 13 mission, resulted in the Swiss watch brand being awarded the Silver Snoopy Award in 1970. This recognition gave birth to another iconic timepiece, the 2020 Omega Silver Snoopy Award.

The 2020 Omega Silver Snoopy Award timepiece is in-demand due to its stunning features and super functionalities. It also showcases Omega’s years of experience and expertise in watchmaking. Take a closer look at its refined details and you will surely be amazed at how exceptional this watch is. All in all, the 2020 Omega Silver Snoopy Award is the perfect definition of a watch with a rich heritage and excellent functionalities.

All images are credited to Omega’s official website unless otherwise stated.