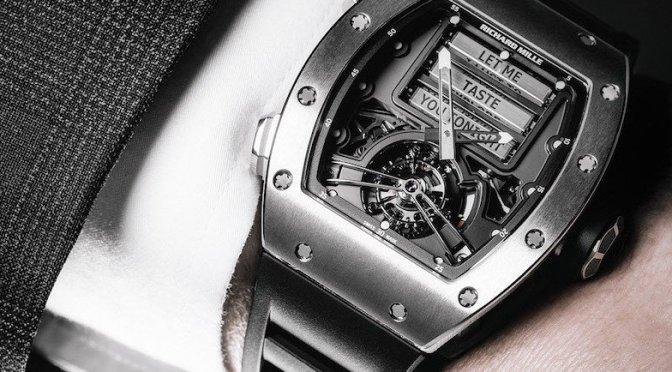 Sex has always played a big role in keeping the excitement alive even in watchmaking. For centuries, companies have produced watches that display couples or even a group of people doing the act. Some are subtly suggestive, while others are outright blatant. Some scenes are depicted on the caseback, and others are incorporated — or even serve as the highlight — on the dial.

In the 17th century, artisanal crafts were all the rage. Customers had the option to commission watchmakers to customise their pocket watches. Some had engravings or even portraits of their loved ones incorporated on the dial or decorated on the caseback.

From romantic — I WANT TO KISS YOU to downright sensual — I WANT TO CARESS YOUR NIPPLE, the messages are meant to be fun overall. To keep the fun and excitement, Richard Mille did not disclose the full list of combinations of phrases so the owner will be surprised each time.

To operate, you simply press the button at 10 o’clock position. The watch will then randomly assemble a new message of love or lust on the dial.

One of the benchmarks that let you know a watch has already made it is when one of the A-list celebrities is spotted wearing it. In the case of the RM69, it was spotted a few times on the wrist of celebrity rapper and music producer Drake.

A playful addition to his million-dollar outfit, the Richard Mille RM69 is, indeed, more than just a celebrity accessory. It has charms and high-calibre qualities on its own that enthusiasts — whether they find the watch worthy or they feel it’s just another branding gimmick — are dying to get their hands on.

The watch is powered by the exclusive self-winding Jacob & Co. Calibre JCAA01 movement, boasting 48 hours of power reserve. It has a 30m water resistance and an elegant black leather strap. Limited to 69 pieces, the Jacob & Co. Caligula also comes in versions with diamonds.

The watch comes in a 44-mm case of either titanium or black-DLC-coated stainless steel, with black rubber straps with folding clasps of DLC-coated steel. Each of the four variations only has 88 pieces available.

Reuge is famous for specialising in intricately hand-crafted music boxes. And in celebration of its 150th anniversary, the company launched a limited-edition special pocket watch. At first glance, the pocket watch looks like your standard tribute watches. This one is an ode to Polo (the sport). The front dial of the pocket watch features a varnished painting of a polo sportsman on a horse and a woman seemingly waiting for her lover to finish the match. At the upper half of the painting is a sub-dial with gold hands and Roman numeral markers. However, the inside of the pocket watch is a whole different story. Flip the pocket watch open to see another intricate engraving; this time with the lovers finally together and in the midst of copulation. In the stable, no less! The watch features moving automatons, and both of the engravings are made of bronze.

For another fun read about watches, check out our feature on the John Wick Watch that everyone has been talking about.