Over the years, Swiss luxury watchmaker Audemars Piguet has mastered the art of watchmaking craft, earning a reputation as one of the few oldest and exclusive watch brands in the world. Every now and then, Audemars Piguet releases a limited collection of watches, to the delight of its followers. 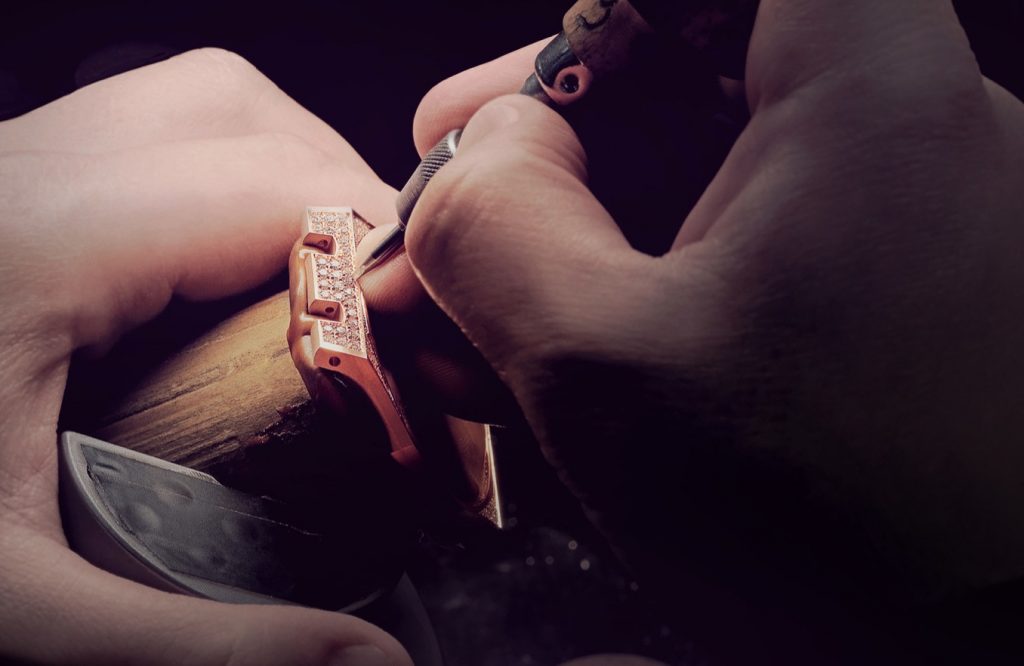 With craftsmen that have been practising the same Swiss watchmaking techniques passed down from generations, Audemars Piguet has defied theoretical and technical boundaries. As per current statistics, the Swiss luxury watch company is among the very few surviving family-owned establishments of its kind.

Since its founding in 1875, Audemars Piguet has built a strong following and delivered the same quality products. In fact, it is one of the most sought-after watch brands in the world, with fans that include celebrities, politicians, and royalty.

Are Audemars Piguet Watches Worth the Hype?

Audemars Piguet craftsmen pride themselves in creating watches with artistic mechanisms, chronographs, and astronomical complications. Over 80% of all the Audemars Piguet watches feature at least one complication. Some of their watches are so exquisite that many believe they should be preserved in museums.

In 1972, Gerald Genta, an artist and luxury watch designer, conceived one of the two most precious projects for Audemars Piguet to date, calling it the Royal Oak. It was the first stainless steel collection with the octagonal case held together by exposed screws. 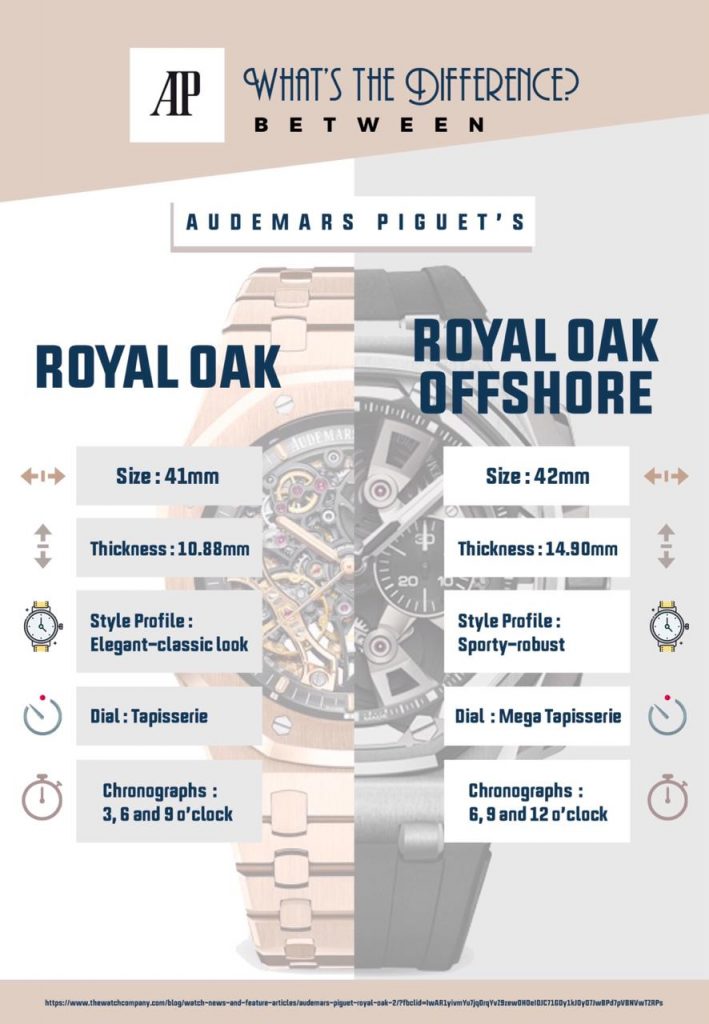 Although many had their doubts about the watch because of its unconventional design, it soon grew to become the main flagship product for Audemars Piguet. It set a precedent for many watch companies to follow.

To celebrate the success of the Royal Oak, the company launched a Royal Oak spin-off on its 20th birthday, called the Royal Oak Offshore. The two are hard to tell apart, judging by it’s almost the same design and features. In this article, we outline the main differences featuring some of their most familiar pieces in both collections.

The differences between the Royal Oak and the Offshore are subtle but noticeable — mainly on the size, a little on dial patterns, and more on the chronographs.

Style Profile. Because of the size differences between the Royal Oak and the Royal Oak Offshore, the latter’s style is more sporty-robust, as compared to the elegant-classic look of the Royal Oak.

To illustrate further, we have collated a few of our favourite pieces from each collection below. 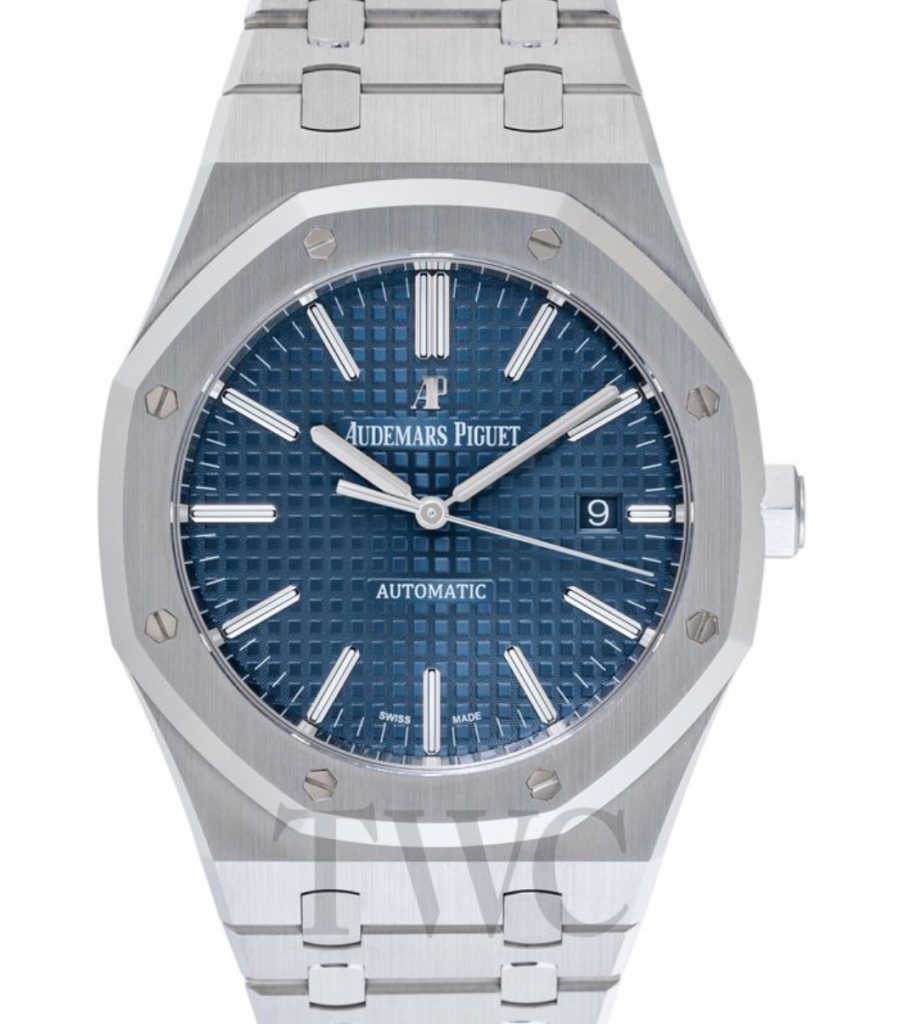 The 41mm Audemars Piguet Royal Oak Automatic is one of the first in the Royal Oak series. With an impressive 41mm display, it comes with a beautiful blue dial that people love. Hence, it keeps selling out. The hour markers come in 18K white gold presented against the famous Grand Tapisserie pattern.

If you often wear a suit, then this is perfect for you with its thinner 9.8mm case. The fact that it comes in pure 316 L stainless steel is what made it famous in the first place. The watch comes with a 60-hour power reserve. 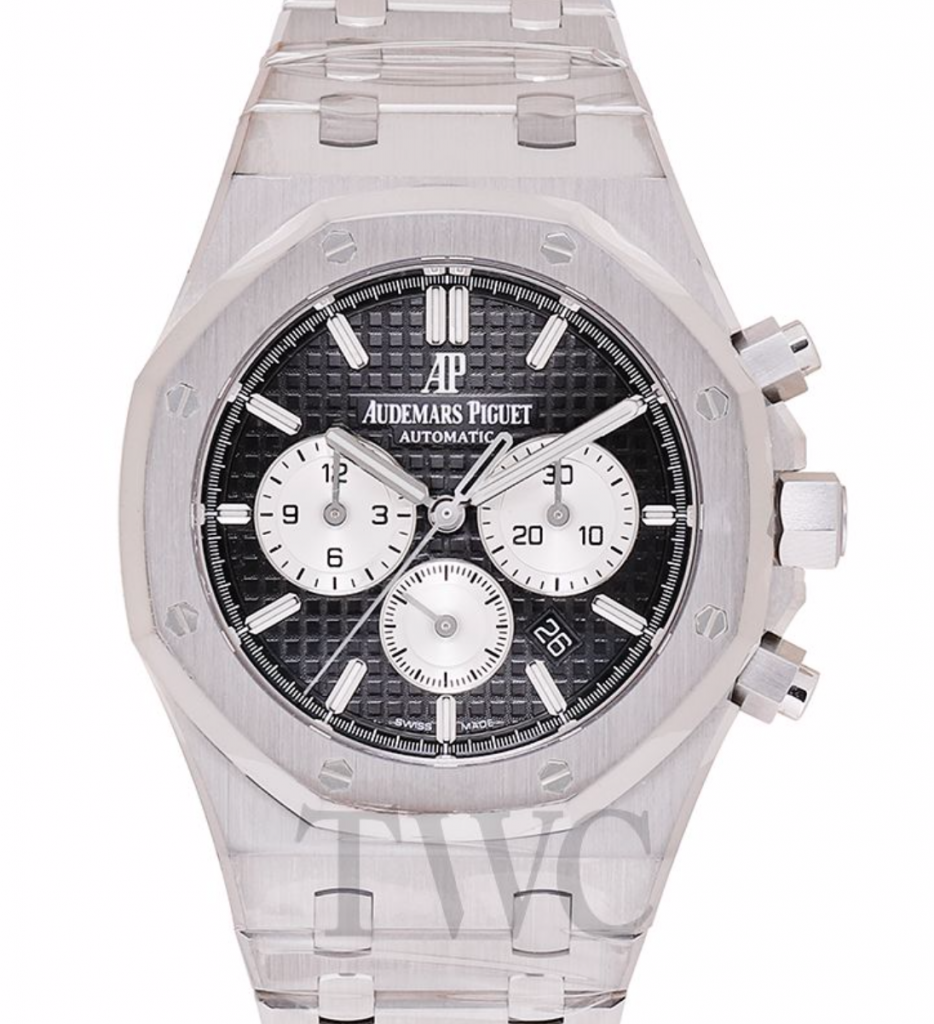 Like all watches in the Audemars Piguet Royal Oak collection, the Royal Oak Self-winding Chronograph comes in a 41mm stainless steel casing with glare-proofed sapphire crystals. It displays a black dial featuring the Grand Tapisserie pattern, this time with bigger chronograph counters and brighter luminescent coating for optimised readability.

Powered by the self-winding calibre 2385If movement, this Royal Oak Self-winding Chronograph offers a 40-hour power reserve. What makes this watch stand out is it’s self-winding mechanism, meaning it’s powered by the natural movements of your wrist. 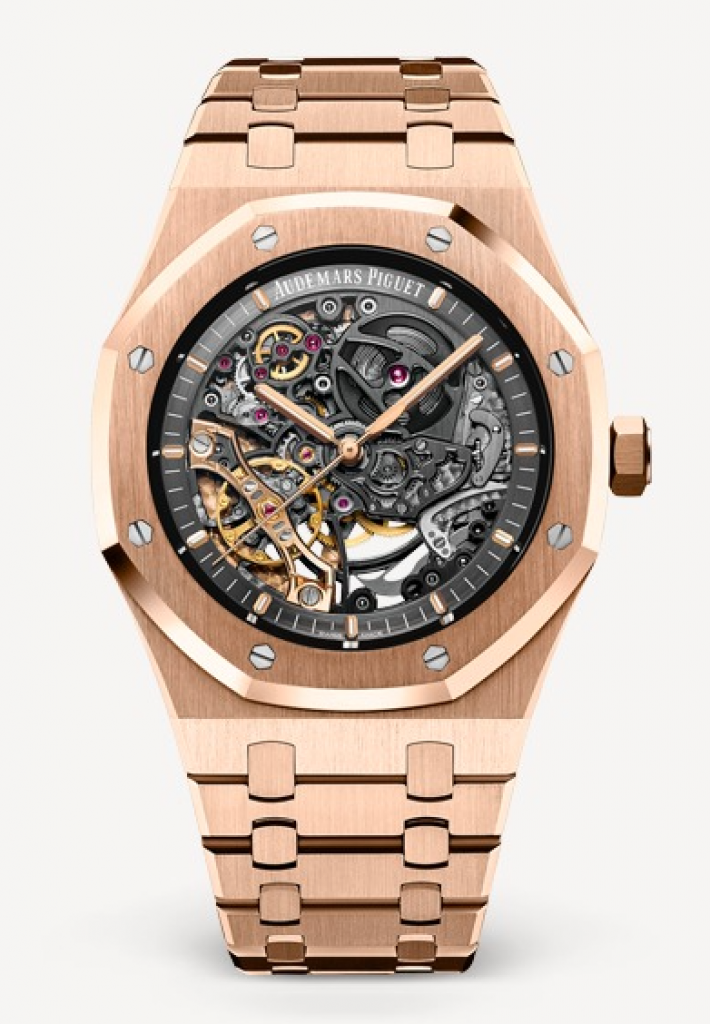 With an 18K pink gold case protected by a glare-proofed sapphire crystal and caseback, the Audemars Piguet Royal Oak Double Balance Wheel Openworked watch is a fashion statement. This watch tackled previous problems on stability by fixing a balance-spring assembly and a second balance wheel on the same axis. This ensures the movement is precise, which is what you paid for anyway.

The 41mm watch features a grey openworked dial with pink gold applied hour-markers and Royal Oak hands with luminescent coating. Running on the Manufacture calibre 3132, this watch has a 45-hour power reserve and a 50m water resistance. 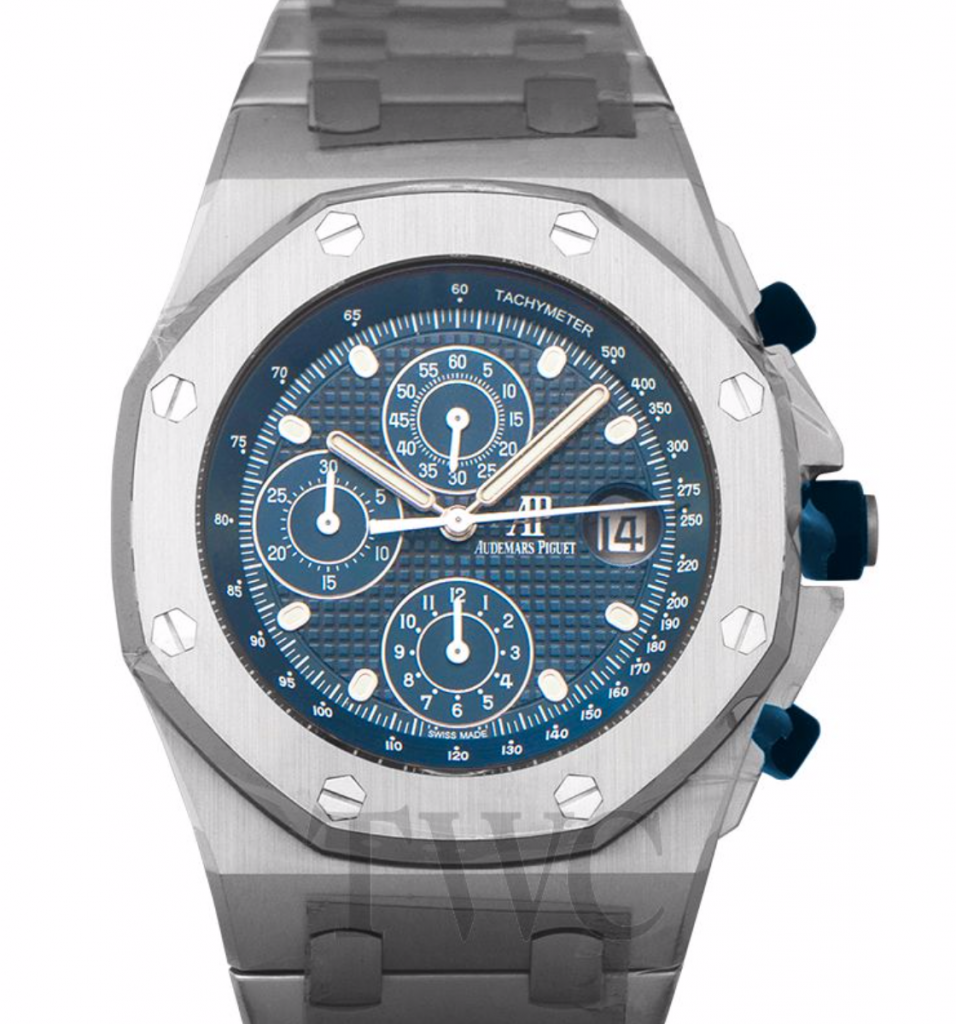 Robust at 42mm in diameter and with a thickness of 14.4mm, this Audemars Piguet Royal Oak Offshore Self-winding Chronograph watch maintains its elegance and sophistication with the blue dial and stainless steel case and bracelet.

The dial features the Petite Tapisserie pattern accented by a darker blue inner bezel. The markers and Royal Oak hands come in a beautiful 18K white gold with a luminescent coating for maximum readability. A date window peeks at 3 o’clock, blending in well with the three sub-dials for chronograph functions. The screw-down crown and the push-pieces are in the same blue shade, complementing the stainless steel silver of the body.

The calibre 3126 / 3840 Manufacture powers this self-winding chronograph with a 50-hour of power reserve. 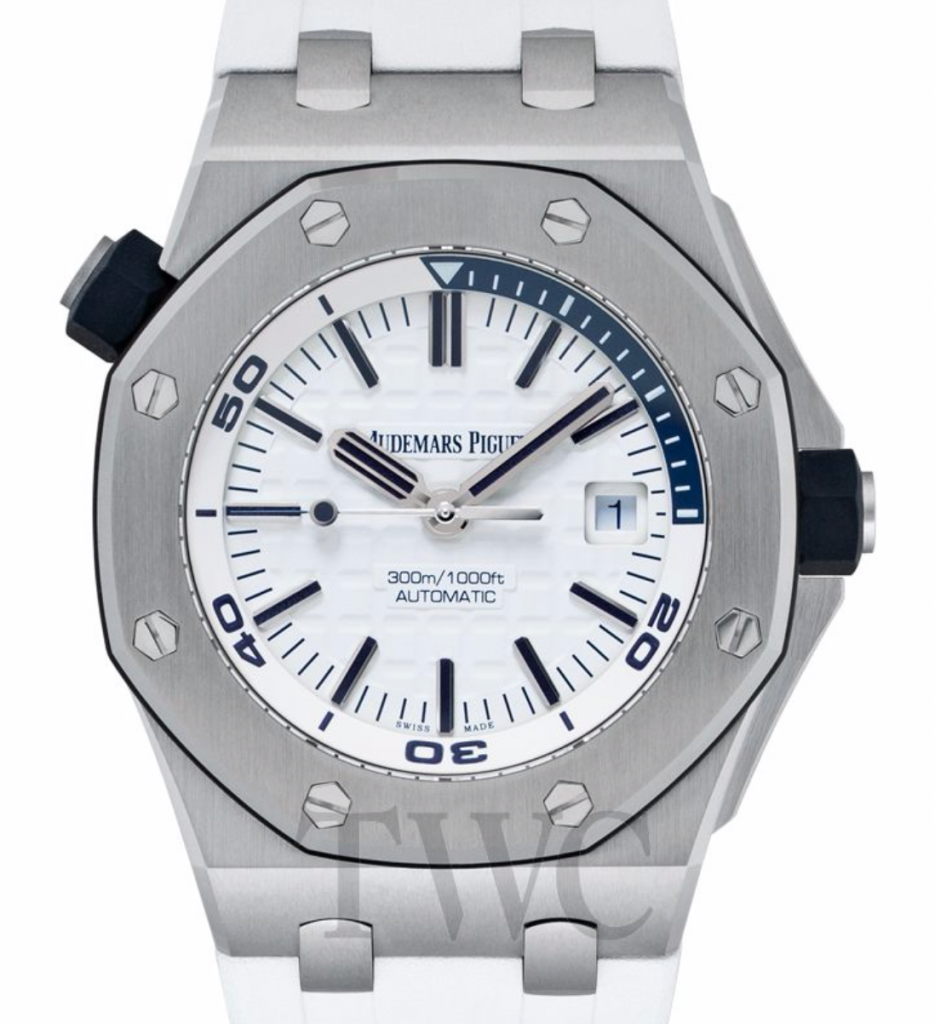 The Audemars Piguet Royal Oak Offshore Diver comes in a white dial, which is a significant deviation from their usual blue trend. The dial, of course, features the iconic Mega Tapisserie pattern, which is a more notable variation. The hour markers come in 18K white gold, but the coating is in blue luminescent to break the monotony. Looking suave is the white rotating inner bezel with diving scale and zone from 60 to 15 minutes in blue.

As often the standard with the Offshore, the case of this particular model is 42mm with a thickness of 14.4mm. And as the name suggests, the watch is made for people with a great love for water sports. It is water-resistant up to 300 metres. 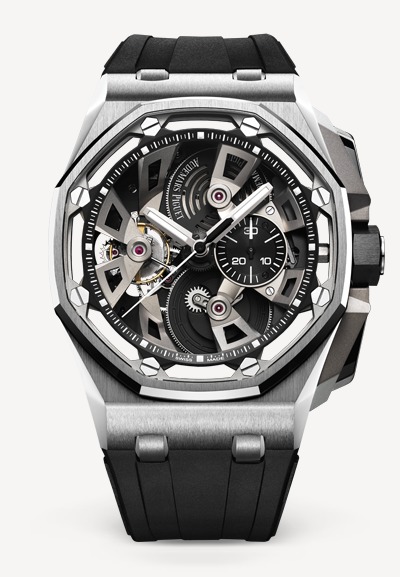 For its 25th anniversary, the company celebrated by releasing two limited-edition chronographs, one of which is this Royal Oak Offshore Tourbillon Chronograph. It was redesigned to represent the quality of the Avant-garde spirit of contemporary art in architecture.

This sophisticated Tourbillon Chronograph has an impressive 45mm case with a thickness of 16.1mm. The black dial features beautiful 18K white gold hands, as well as the sub-dial for the 30-minute chronograph function. The Tourbillon is visible at 9 o’clock.

For another interesting read on Swiss luxury watches, check out our feature on Patek Philippe Nautilus here.