Omega vs. Rolex: Which Watch is Better?

When trying to decide between Omega and Rolex, it’s important to look at what makes of these brands distinct in their different ways. In fact, it’s similar to asking, “Who’s gonna win, Roger Federer or Rafael Nadal?” when either of them is great at what they do. So let’s sort out the confusion by stating a few facts to help you make the right decision.

Each of the watch companies mentioned is highly prestigious in the watch industry. However, as competition goes, all have battled for years to earn the hearts of watch aficionados everywhere.

In the classic battle of Omega vs. Rolex, here are a few points that can help you decide which should be your next watch and why. 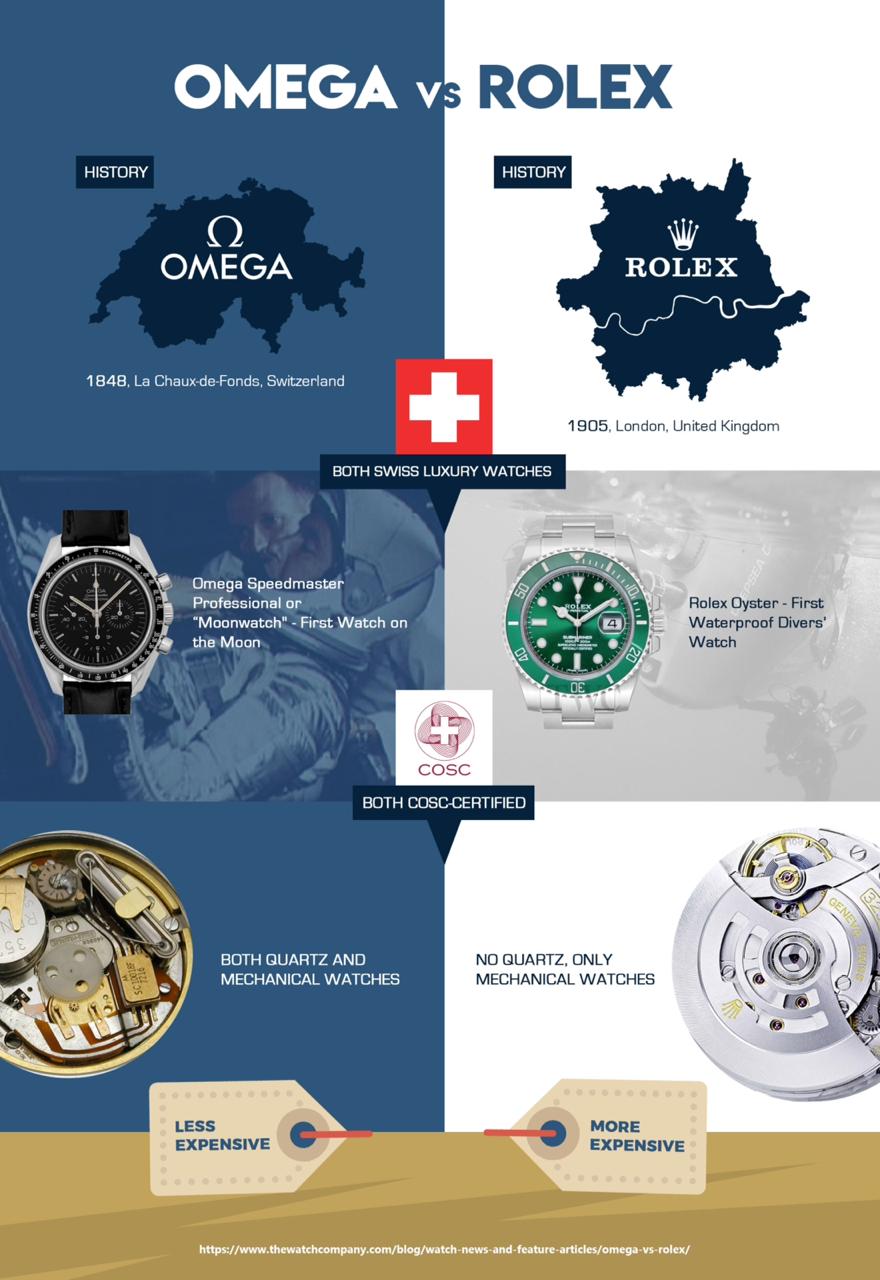 It took an incredibly long period for Omega to gain traction in the watch industry. Omega’s watchmaking began in the mid-1800s when a 23-year-old watchmaker, Louis Brandt, opened a small workshop in La Chaux-de-Fonds in Switzerland.

Rolex, on the other hand, was introduced in 1905 by Hans Wilsdorf. Wilsdorf’s vision was to create a wristwatch celebrating seamless chronometry. Hence in 1910, Rolex became the world’s first brand to receive the Swiss Certificate of chronometric precision.

Omega appealed to buyers across the world with its Labrador calibre dial. The 19-ligne calibre’s release in 1894 soon followed. Later, its centurial creation the Seamaster collection launched in 1948 to mark 100 years of production.

The Omega Seamaster is an icon in itself. In fact, it has been the official timepiece for the Olympics and has even been used for momentous travel across the North Pole by Ralph Plaisted, one of the first men to journey a surface traverse across the thin ice of North Pole.

The watch brand also features collections like the Omega Speedmaster — the first-ever watch worn on the moon, and, of course, who can forget the Omega Constellation and Omega De Ville, two of Omega’s well-received dressy wristwatches.

Indeed, Rolex has its own success story that begins from exploration to preservation and the building of an empire of brand loyalists across the globe. Its initial success reached new heights when in 1953, explorers and mountaineers Sir John Hunt, Sir Edmund Hillary and Tenzing Norgay became the first men to conquer Mount Everest while sporting the Rolex Oyster Perpetual.

Wildsdorf’s agenda to put his watch brand to test didn’t end there. Rolex timepieces have delivered breakthrough results in deep-sea experiments, including being submerged to a record depth of 10,916 meters in the Mariana Trench. The Rolex Submariner is designed for divers to allow them to read their immersion time.

Both brands mentioned celebrate the concept of design with an eye for detail. The timepieces designed at the manufacturing outlets of these brands undergo further testing under COSC (‘Contrôle Officiel Suisse des Chronomètres), which certifies the supreme accuracy of their chronometers.

When comparing the two, one must give credit to Omega for its innovative handcrafted mechanical watches which include some quartz pieces.

Rolex, on the other hand, has stopped designing timepieces using quartz manufacturing. As a matter of fact, Rolex watches have a -2/+2 level of accuracy that beats COSC’s ranking. As such, it delivers timepieces with excellent chronometer certifications.

Omega and Rolex demonstrate excellence when it comes to water resistance in their watches. In fact, both have timepieces catering to professional divers and diving aficionados.

Omega launched the Seamaster Ploprof 1200m, which refined the calibre of most watches with its 4000 feet water-resistance. It also introduced timepieces like Seamaster Professional Diver 300m and the much-touted Seamaster Planet Ocean. These feature a built-in helium release value to perfect accuracy for the wearer while tracking time.

Rolex isn’t far behind, however. The brand released the Rolex Deep-Sea series which beats several records by being able to resist 12,800 feet underwater.

The Rolex Submariner series is another masterpiece created by the Swiss brand, which provides professional divers a means of reading time accurately underwater. It further enhances the waterproof experience by adding a triplock winding crown, sturdy non-damageable Sapphire crystals, an oyster bracelet, and a glidelock system support, thereby guarantying security and a comfortable fit.

So, in the classic Omega vs Rolex tug of war, who wins? With almost the same style and mechanical prowess, historical significance and brand acclaim, Omega and Rolex both deserve a place in your watch collection. At the end of the day, it’s really all about your personal preference. Whether you get a Rolex or an Omega, either won’t disappoint.

For another interesting read on Omega, check out our story behind its iconic symbol here.