Seiko Flightmaster: An Affordable Alternative to the Navitimer 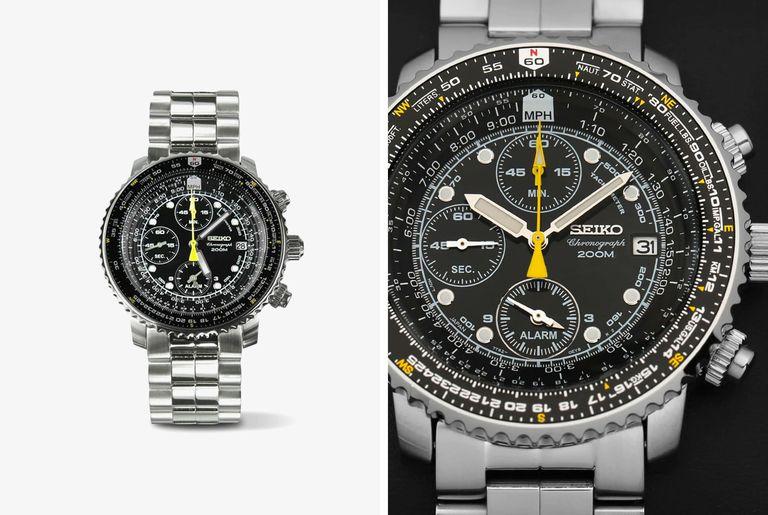 While it is true that Seiko is widely known for its dive watches, they also excel in other categories. One such example is the Seiko Flightmaster, a chronograph tool watch that has been adored by aviators for years. Some people even claim that it can compete with the likes of the Omega Speedmaster and Breitling Navitimer due to its quality.

No doubt, the Seiko Flightmaster contains features that you would normally expect from a pilot watch and more. Among those features are a chronograph, dual time zone, and others. So without further ado, here is our guide on Seiko’s ultimate pilot watch.

A First Look at the Seiko Flightmaster

This watch is Seiko’s venture into affordable pilot watches. True enough, the Seiko Flightmaster has a lot of features that aviators will find extremely useful. One such feature is the slide rule bezel. This is the feature that makes the Flightmaster different from the other pilot watches. It is also the reason why a lot of people call it the “poor man’s Navitimer”.

What is the Slide Rule Bezel?

When reading about pilot watches, you might come across the term “slide rule bezel”. Simply put, this is a part of the watch that allows the wearer to compute mathematical equations. It was popularised by Breitling in the ’50s when they incorporated it with the Navitimer. And as the years went by, the technology was adopted by other watches like the Seiko Flightmaster.

The Slide Rule Bezel was originally made with pilots in mind. And with that said, the future airmen had to take lessons on how to use it in flight school even until this day. Despite the declining popularity of the slide rule bezel in watches, it has proven to still be useful.

A lot of enthusiasts fondly call it the “poor man’s Navitimer”, and rightly so. From afar, you would likely mistake it as its luxury counterpart. And if you do, we wouldn’t blame you. The Seiko Flightmaster and the Breitling Navitimer do have a lot of similarities when it comes to aesthetics.

As can be seen from the picture above, the dial of the watch has too much going on. In fact, you would be hard-pressed to find a negative space on it and we’re not exaggerating. The dial might be too cluttered for some people’s taste, but remember that it is a tool watch. And it is meant to provide as many numbers as it can.

With that said, having a busy dial is a small price to pay compared to the functions that the Seiko Flightmaster can do. But that’s not to say that the Japanese brand skimped on aesthetics. In fact, the watch designers gave the design a lot of thought as well.

Busy Yet Easy to Read

In spite of all the numbers on the watch’s face, the dial is easy to read once you get used to it. The three chronograph dials are placed at the 6, 9, and 12 o’clock positions. Furthermore, the date window is beside the 3 o’clock position. Seiko intentionally made it small to make room for the other features.

Moving to the outer part of the dial, you can see the tachymeter and slide rule markers. The internal bezel is sloped, making it easy for the wearer to calculate and read the watch.

To further improve readability, the watch designers gave the hour and minute hands the extra-large treatment. Apart from that, they also coloured them in bright yellow. This makes the hand easily visible against the black background.

Lastly, the whole dial is protected by a domed Hardlex Mineral. It is one of the most preferred materials for a pilot’s watch due to its durability. Apart from being resistant to scratches, it is also resistant to shattering. This is very advantageous, especially in emergencies as the airmen wouldn’t have to worry about shards of glass in the cabin.

Before computers became powerful, scientists, pilots, and divers had to rely on their watches for computing. These watches had slide rules, which are standard equipment for both commercial and military aviators. While these are difficult to learn, the features they offer can come in handy.

Fortunately, the Seiko Flightmaster has this feature. Here is a list of what it can do.

With so many features, it feels like you’re looking at a specs sheet of a computer. Indeed, this is where the Seiko Flightmaster truly shines. No wonder pilots from all over the globe have trusted this watch for years.

Apart from the slide rule bezel, the Seiko Flightmaster has a few more chronograph functions. And let’s start this section off by discussing how pleasurable it is to watch the chronograph hand. To explain, the chronograph hand sweeps at 5 times per second. What this means is that it moves in a very smooth manner. This is an impressive feat as it is hard to achieve in a quartz movement.

The Seiko Flightmaster features a flight alarm, just above the 6 o’clock position. To further explain, it is a 12-hour alarm that has an audible beep. While its original purpose is for setting an alarm, it can also be used as a subdial for an additional timezone. This can be extremely useful for people who frequently travel to different countries.

Moreover, the other two sub-dials are placed beside the 9 and 12 o’clock positions. The one on top is used for tracking the minutes, while the one on the left is used for counting the seconds.

Lastly, the watch has a split-time function which you can operate using the pushers at the side. The top right button is for starting and pausing the chronograph while the one at the bottom is for resetting. This is most useful in sporting events.

The Seiko Flightmaster, with all its functions and complications, needs a reliable movement. And what better way to power such a magnificent watch than the Calibre 7T62 movement? It is battery-operated and is one of the most trustworthy calibres of the Japanese brand.

Among its features are the sweeping chronograph seconds hand, alarm, and dual time complication. And if you’re wondering about the accuracy, you’ll be delighted to hear the numbers. This calibre has an accuracy of +/- 15 seconds per month at normal operating temperatures. Meanwhile, the alarm has a rating of +/- 1 minute.

While some enthusiasts think a quartz movement lessens the quality of the watch, I beg to disagree. In the Seiko Flightmaster’s case, the quartz calibre gives the watch an edge. For one, it is more durable and cheaper to maintain. Additionally, the improved accuracy of a quartz movement is necessary for all the calculations that a pilot needs.

The Seiko Flightmaster comes with a stainless steel bracelet and has a combination of polished and brushed finishes. It features a complex four-part linking, which makes it visually interesting. Moreover, the polished centre links match the finish of the case. The bracelet itself has no tapering. However, the clasp is smaller at 19mm.

Additionally, the clasp has a fold-over push button that has a safety closure. This prevents the bracelet from accidentally unclasping. This is a very useful feature as pilots use their hands often and are prone to bumping the watch.

Lastly, the Seiko Flightmaster comes with a lug width of 21mm. Other people may think that it is difficult to find straps that match this size. However, nothing is farther from the truth. In fact, you can fit both 20mm and 22mm straps to it.

When it comes to the strap design, the Flightmaster can be versatile. Of course, metal bracelets will emphasise its ruggedness. But if you want something more elegant, a leather strap will also fit the timepiece nicely.

Looking at its specs, you would think that the Seiko Flightmaster fetches a huge amount of money. Obviously, the number of features is directly proportional to the number of zeroes on its price tag. However, this is not the case with the Flightmaster. In fact, it costs only less than $500!

The pricing seems like a miracle. So, how exactly did Seiko manage to keep its price tag low? One reason is the choice of movement. As mentioned before, the Flightmaster uses a quartz calibre instead of a mechanical one. Apart from the extra accuracy, the quartz movement also helped keep the price tag low while keeping the quality top-notch.

You would be hard-pressed to find something that the Flightmaster cannot do. Indeed, it seems like the watch can provide almost anything you need, especially when you’re a pilot. It can calculate the fuel consumption and climbing rate among others. In other words, it can do what most watches cannot do.

Furthermore, the previous item on the Pros list pairs well with this one. Believe us when we say that its features are normally found in watches that are twice or even thrice more expensive than the Seiko Flightmaster.

Aviators travel from one country to another. So, it is expected that pilot watches can handle extreme environmental conditions. With that said, the Seiko Flightmaster can handle all the beating that you give it.

Both of its case and bracelet are made with durable stainless steel. Apart from that, the whole dial is protected by a domed Hardlex mineral which is engineered to be shatter-resistant. And lastly, it can also resist scratches so you can still read the time without any problems.

1. The dial is cluttered.

It seems like the dial design is the only fault we can see on the Flightmaster. As can be seen above, this pilot watch is jam-packed with features. And having so many features means the watch needs a lot of space for those complications.

With that said, every space on the dial and bezel is filled with letters, numbers, or markers. While the dial is not exactly hideous, the design can be a deal-breaker for some, especially for those who are into minimalistic timepieces.

However, it should still be mentioned that despite the clutter, Seiko took the necessary measures to optimise readability. Each marker is carefully placed and the hands are customised to be bigger so you don’t have to strain your eyes just to read the time. So to conclude, the concern regarding the dial is purely aesthetic.

2. It is complicated to use.

The Flightmaster’s manual is thicker than the average, thanks to the functions of the slide rule bezel. So, it is not surprising to find out that the watch can be confusing to configure. Sometimes, it can be so complicated that even pilots had to take some lessons on how to use it during their days in flight school.

To conclude, if you’re looking for a no-frills watch that is easy to use, the Seiko Flightmaster might not be for you.

Who Should Buy the Seiko Flightmaster?

First off, you don’t have to be a pilot to own a Seiko Flightmaster. The amazing price-performance ratio alone should be enough to entice people who are looking for a reliable quartz chronograph.

Due to its numerous functions, the Seiko Flightmaster is the right one for you if you love tinkering with your watch’s features. Indeed, you may not use the slide rule bezel so much in your daily life. However, fiddling with it can be a lot of fun and can be fulfilling for watch enthusiasts.

It is also for people who are eyeing an affordable alternative to a Breitling Navitimer due to their similar looks.

It should be obvious by now that the Seiko Flightmaster offers an incredible value for your money. The Japanese watchmaker never fails to amaze its fans with its watchmaking prowess. With the Flightmaster, they have proven yet again that a sub-$500 watch can be on par with luxury watches.

Interested in more history about pilot watches? Check out our primer on Flieger watches!