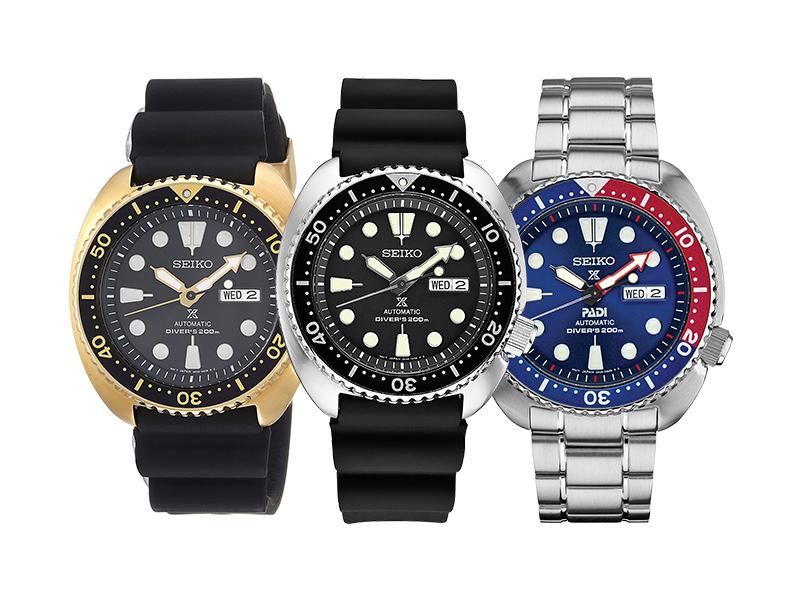 Seiko dive watches are no stranger to every collector’s selection. Walk up to a collector and ask them: what was your first ever watch? Chances are they’ll drop names such as Sumo, Tuna, or Turtle— all of which are from Seiko. This shouldn’t come as a surprise since the brand is a favourite among enthusiasts. The history of Seiko Turtle traces as far back as 1976, with the production of the 6306 and 6309 models.

The brand later reissued the collection with the same principle and brand new tech. And so, the modern counterparts of the Seiko Turtle were born: the SRP777 (black), SRP775 (Black/Gold), SRP779 (Pepsi Bezel), SRP773 (Blue Bezel), and a whole lot more – all of which were instant hits upon launching. But, what exactly makes the Seiko Turtle such a compelling first watch for collectors?

History of the Seiko Turtle

A lot of people would compare the first-ever Turtle with the original Seiko 6105 watch. Many consider this classic as the grandfather of Seiko dive watches. Albeit not the first dive watch, the 6105 surely became one of the most popular Seiko watches. If you’ve seen the classic war film Apocalypse Now, you might notice the timepiece on Martin Sheen’s wrist. That’s the 6105, noticeable even from afar due to its peculiar style. Not to mention, its cushion shape would later become a reference for the Turtle and the source of its very nickname.

At the time of its release, the 6105 stood out for being a huge watch in a market flocked with smaller watches. The watch’s 41mm case and 19mm band completely took over the hearts of many enthusiasts at the time. Needless to say, the watch couldn’t be launched at a better time than then.

The first Seiko Turtle would technically be the Seiko 6306, but it wasn’t until the Seiko 6309 that the nickname Turtle caught on. The 6309 earned the name Seiko Turtle Dive Watch. Upon its release, a lot of people compared it to Seiko 6105, but with a different appeal. While both watches almost look distinctly alike especially with the cushion shape, there are still a lot of differences between the two. The dial on the 6309, for instance, was much different, with circular markers, instead of trapezoid ones. The band thickness also improved from 19mm to 21mm. Moreover, the case diameter itself got bigger from 41mm to 44mm.

The Seiko 6309 also had a much more utilitarian look. Meanwhile, the watch’s movements improved as well. The 6309 had 17 Jewels. For almost 12 years, the 6309 was in production. And during its production phase, a lot of people patronised the watch. Today, it’s still one of the most coveted vintage watches out there.

Reissue of a Giant

A lot of fans adored 6309, especially with its one-of-a-kind look and feel. But it wasn’t until 2016 did Seiko reissue the Turtle dive watch under the Prospex collection. The collection of dive watches introduced high-grade materials and functionality. However, the Turtle would be the entry-level watch in the line of dive watches – placing it on the more affordable side of the scale.

There were various models released, having various colourways that were all adored by enthusiasts and collectors alike. The SRP777 was the most popular for its close resemblance to the first Turtle design. It had a black dial and bezel that was the iconic look of the Turtle then. Meanwhile, the SRP775 had a Black-Gold colour combination that added a bit of flair to the classic look. On the other hand, there were also blue bezel models (SRP773).

The Many Turtles of Seiko

There isn’t much difference between the Turtles. They all have the Calibre 4R36, as well as a rotating 60-click bezel. However, design-wise, these watches still have personalities of their own. With various special versions and classic models, there’s no denying that this collection is rich. For any person beginning to collect, there’s a whole spectrum to choose from as their first automatic diver from the Turtle alone.

A huge hit upon its release, every single one sold out for months. But Seiko didn’t stop at a reissue and introduced a few other Turtles in the lineup. There are various notable models such as the SRPA21, which is a variant of Seiko’s PADI dive watch. The watch immediately caught the attention of dive enthusiasts, especially since the Professional Association of Diving Instructors was one of the most respected organisations in diving.

You might also recognise the Batman model, also known as the Seiko Turtle SRPC25K. This watch is recognisable even from afar due to its gradient dial in black/blue/black. It basically has the same features as the other Turtles but with new attractive colours.

In 2017, Seiko released SRPC35K1, SRPC37K1, SRPC39K1, and SRPC41K1 divers. These models became nicknamed the Seiko Mini Turtle. Both the SRPC35K1 and SRPC37K1 come with black dials while the SRPC35K1 has a two-piece silicone band. The SRPC37K1, on the other hand, features a stainless steel bracelet. Meanwhile, SRPC39K1 has a matte blue dial and blue bezel. And, of course, the SRPC41K1 is co-branded with PADI with a Pepsi-style bezel, red minute hand, as well as a wavy black dial.

The watch was a refreshing, smaller, take on the SRP series especially with the change of face and crown position. From 4 o’clock, the crown moved to 3 o’clock. It’s also significantly smaller with the watch measuring 42.3mm in diameter. A lot of enthusiasts who held the watch on their hand had the impression that the Mini Turtle wasn’t a Turtle after all. It was, in fact, closer by design to the 1996 Seiko SKX007. Moreover, the Seiko Mini Turtle models were also powered by the Calibre 4R35. It is the same as the Calibre 4R36, except with a date function at 3 o’clock.

However, give or take the differences, there was a reason for the nickname it earned. It still had about the same functionality as the regular Turtle, as well as the same price point as its supposed predecessor.

The King Turtle wouldn’t have earned its nickname if not for its obvious superiority from its siblings in the SRP series. Every Seiko Turtle cost less than $500, but the King Turtle wound up that price point by quite a bit. But is it worth it? The jury has been out since its release in early 2020 with a resounding yes. There are various reasons to love the King Turtle like the new textured dial designs or the ceramic bezel. The Seiko Green (SRPE05K1) and Blue (SRPE07K1) King Turtles would blow your mind right at first glance.

You might be used to the plain colours of the Turtle but with the King Turtle, everything is turned up. For instance, the then-aluminium bezels are replaced by a ceramic rotating bezel that automatically adds texture and personality to the watch. Not to mention, it’s scratch-resistant, making it a more viable choice for material if possible. Then, the dials. The new dials of the King Turtle are completely different given that most Turtles only had gradients or plain colours to spice up the dials. This time, they are textured. The SRPE05K1 (Green) has a raised little square pattern, while the SRPE07K1 (Blue) has what appears to be a wave pattern.

Moreover, Seiko added a magnifier on the sapphire crystal for the day/date window at 3 o’clock. These changes in texture and added features certainly made it such an enticing offer. And while it has the same features as the other Turtles like the 200m water-resistance rating or the Calibre 4R36 movement, its look alone will have you sold. The refined new look could even double for a dress watch if styled properly. It was as refined as it was sporty which was something unusual, especially for dive watches.

If you’re not in the loop with new limited-edition watches, you might have missed the limited-edition Turtle released exclusively in Thailand. The Turtle Zimbe came out in 2016 with a limited edition of 1,299 pieces. The Zimbe collection comprises various Seiko Prospex watches such as the Sumo, Tuna, and, of course, the Turtle. In fact, the Zimbe concept launched with a Seiko Turtle.

Its nickname, “Zimbe” came from the Japanese name “Jinbe Zame”, which means “whale shark”. If you look at it, the Zimbe collection enforces the image of a whale shark that never backs down on any adventure. This is heightened by the statement “move your adventurous mind further”. Therefore, wearing the Zimbe symbolises moving forward with adventures ahead and never backing down no matter what. As a reminder, all Zimbe watches have a Zimbe engraving on the back of their case. Today, there are a total of 12 editions of Zimbe watches that came out since the launch of Zimbe No. 1, a Turtle.

While it’s a mouthful to say, the Seiko Prospex Silver Grey Turtle or SRPA19K1 is better known as the Zimbe No. 1 (1299 limited edition). There was nothing different from the Turtle Zimbe when it comes to specs. It has the same Seiko Calibre 4R36, running at 21,600 beats per hour and a 41-hour power reserve. However, its colours surely make it even more attractive than ever. It has a grey dial and silver bezel that cranks up the spice on the watch. It stood out from the collection that, at the time, only had cool colours in the roster.

In 2019, Zimbe released new edition Zimbe watches, and one of the watches was a Mini Turtle. Zimbe No. 10 or the Seiko Prospex Yellow (SRPD17K) and Green (SRPD19K) Mini Turtle were launched. Each watch model only had 999 limited-edition pieces each. Just like the regular Mini Turtle, Zimbe No. 10 watches have the Seiko Calibre 4R35. This calibre is identical with the Calibre 4R36 (more on this calibre later) except for its date function at 3 o’clock.

The Calibre 4R35 has a date calendar instead of a day/date function, which totally makes sense given the size of the Mini Turtle. The watches come in either green or yellow dials, representing the rich colours you’ll find under the sea. While each watch is only limited to 999 pieces for each model, they’re still quite easy to find as well as affordable in today’s market.

Most Seiko Turtle watches have the Seiko Calibre 4R36 to thank for their accuracy and features. The Calibre 4R36 is an automatic movement used by Seiko in their very own watches. While Seiko manufactures parts for other companies, there are various movements exclusive to their own watches. The movement takes from the popular 7S36 movement and improved it severely. The Calibre 4R36 offers a hacking and hand-winding function among others.

The accuracy of this calibre is between +45/-35 seconds per day. It runs at 21,600 beats per hour and has about 41 hours of power reserve. The same movement also powers the Seiko 5 ‘Bottle Cap’ Sports watch, as well as the Seiko Presage collection.

Compared to other Seiko Prospex watches, the Seiko Turtle would be the most affordable but by far the largest. It’s slightly bigger at 45mm than the Sumo that measures 44mm in diameter. This makes the watch so distinguishable from other watches. It’s a big watch, especially in width with a very peculiar shape. However, for a dive watch, this would definitely be all the basics you’d need. It’s nothing fancy but it sure is good enough for a first-time diver’s accompaniment.

Looking back at the Turtle’s history, it seems like Seiko is far from done when it comes to coming up with new design upgrades for the watch. Especially with what they did to the King Turtle, the possibilities just became endless. While the price of the Turtle hacked up a bit with the new releases, there was no doubt that you’re getting your money’s worth for every watch. After all, there can’t be a more affordable dive watch with features and robust built as the Turtle.

Looking for other dive watches that won’t break the bank? Check out our review of the Seiko Sumo and see how this heavyweight differs from the Seiko Turtle!