More often than not, introduction to horology can be quite a challenge. For anyone who’s new to watch collecting and the industry in general, some terms can, indeed, be confusing. You have a lot of terms that wouldn’t make sense at first encounter. For instance, you have terms such as “jewels” in “calibres” as well as “movements”. Or how exactly does the “bezel” work?  On and on, it goes. One of the terms widely used, especially among grail or luxury watch brands would be “chronometer”. Chances are you’ll encounter not just any type of chronometer but a “COSC-certified” one. So, what exactly is the difference between the two? What are the requirements to get such a certification? Also, what are its criteria? Moreover, which brands can offer COSC-certified watches?

Let’s end the confusion once and for all and dive into the fascinating world of COSC certifications. Learn all about the ultimate watch certification and more!

In 1878, five watch-making cantons had “official offices of control of the rate of the watches”. Located within either watchmaking schools or engineering schools, the offices evaluated the quality of horological objects. Each canton — Bern, Geneva, Neuchâtel, Soleure and Vaud — had different criteria in evaluation. For almost a century, the Swiss watchmaking industry struggled with these differences. So, in 1973, the Central Inspection Commission proposed the establishment of a single commission. The new commission comprises the five cantons, Swiss Chamber of Watchmaking, as well as the Federation of the Swiss Watch Industry or FH.

Thus, the Contrôle Officiel Suisse des Chronomètres. Since its establishment, the institution has been a non-profit organisation meant to serve only Swiss watch brands. Beginning with seven active laboratories, the organisation has since been simplified. It now only has three laboratories located in Biel, Le Locle, and Saint-Imier.

Yes, all COSC-certified watches are chronometers. However, not all chronometers are certified by this organisation.

So, in Switzerland, to be able to stamp a watch as a chronometer, it has to go through tests mandated by the COSC. The institution takes this so seriously that only about 6% of produced Swiss watches earn the title. Yes, that’s still more than 1,000,000 official chronometer certificates per year. But how does this test actually go? What exactly are the requirements to even submit a timepiece for a test? What criteria do they follow before certifying a high precision watch as a chronometer?

For watches to earn the coveted certification, first, they have to pass a rigorous test of accuracy and precision. These, however, don’t relate to the watch’s behaviour when worn. It’s not a simulation of the watch’s day-to-day performance. They are static tests in the laboratory. Contrary to popular belief, COSC doesn’t test finished watches. Instead, they test the timekeeping instruments inside or in more familiar terms, the movements. As a result, the organisation provides a snapshot of the operation of a timepiece at a certain event. This should, of course, attest to the watch’s precision.

Therefore, not everyone can just submit a timepiece for testing. The institute only lets highest quality timekeeping instruments to aspire for the certification. While COSC certifies the accuracy of each watch, they’re only under certain circumstances or environments albeit intense. Therefore, the behaviour of a watch when worn still depends on the wearer.

There are four types of timepieces suitable for submission for the title of chronometer. Firstly, there are mechanical instruments or timepieces with balance spring oscillators. Type I are wristwatches, Type II are pocket watches that are either Lépine or Savonette, and Type III are fixed time devices such as carriage clocks, desk clocks, etc. COSC also accepts Quartz instruments as Type IV or wristwatches with quartz oscillator.

We already know that COSC only accepts high precision Swiss watches. However, not every swiss watch can jump in such a meticulous test. For a watch to earn the coveted certification, the watch has to go through a series of tests.

Firstly, the movement goes in a 5-slot clasp and wound according to the guidelines provided by the brand. Then, for 12 hours, the movement and its parts remain in a temperature-controlled enclosure at 73.4°F or 23°C. From there, the movement has to pass a series of tests for 15 days. The movements undergo tests in five positions (3 o’clock, 6 o’clock, 9 o’clock, the dial on top, the dial on the bottom), and in three different temperatures (— 8°, 23°, and 38°C). This accuracy and precision test focuses on the lost or gained time by each watch. The bigger the watch’s gain or loss is, the less accurate it is. If the watch doesn’t pass this test alone, it would not be COSC certified. COSC-certified watches has an average accuracy of -4/+6 seconds per day.

On the other hand, Quartz movements go through a similar test albeit only last 13 days. However, it is also tested at three different temperatures (— 8°, 23°, and 38°C) but with 4 different humidity levels. While its criteria are less numerous than mechanical timepieces, the tolerance levels on Quartz movements are much more stringent.

Once passed, the movement has to go through judging based on seven various criteria. Type I timepieces have two categories depending on the watch’s size. Category 1 are wristwatches with a fitting diameter greater than 20mm. This means that the fitting surface area should be greater than 314mm2. On the other hand, Category 2 are wristwatches with a fitting diameter of 20mm or less, and a fitting surface area no exceeding 314mm2.

Minimum requirements for balance spring wristwatches or Type I timepieces: 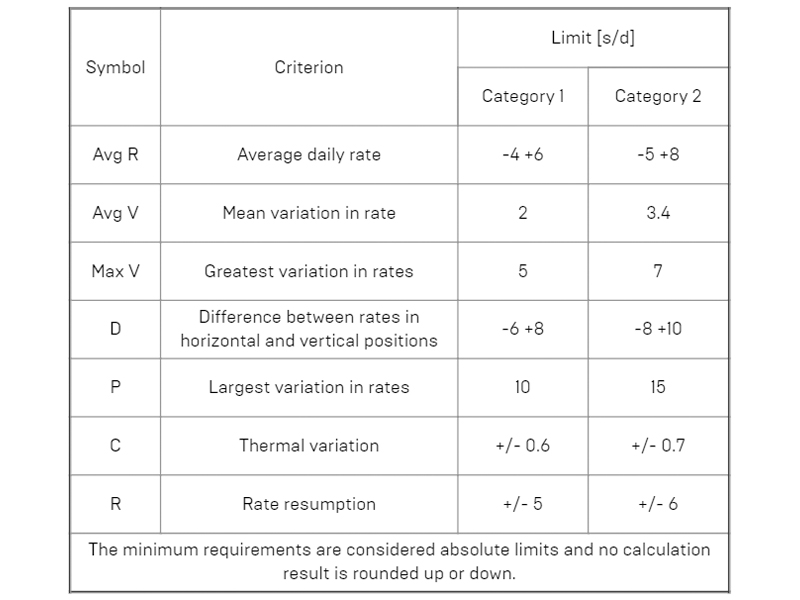 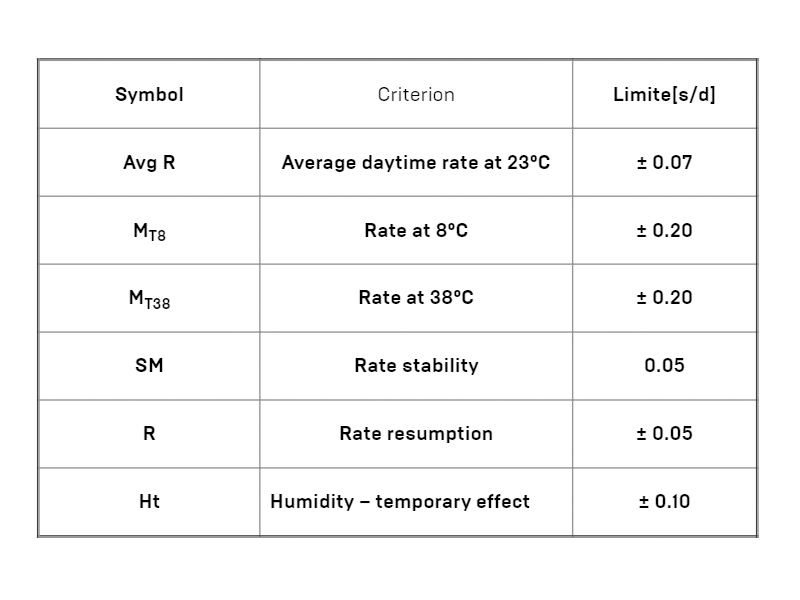 Aside from the observation of movements, COSC also tests watch heads or watches without straps. ISO 3159 specifies that the certification may be carried out at a watch head or movement level. Therefore, the title “chronometer” may apply in the same way in both cases. However, the choice still falls with the manufacturer themselves.

Testing of watch heads is the most absolute. This is due to the fact that there is no further intervention at a production level. But this can be more expensive than movement observation. This is because setting up and observation work involve the presence and manual work of an operator for each part; this makes it longer as well. Movement observations fully function on a computerised scale. So-called exceptional watches mainly go for such observation. The minimum requirements for mechanical watch heads are the same as those for Type I instruments.

Most chronometers on the market include a chronometer certificate on their packaging. Some are branded according to the company. Brands like Rolex and Omega display the word “chronometer” on their watch’s dials. Omega goes as far as providing a METAS certification for their COSC-certified watches.

COSC already ceased releasing information regarding the number of COSC-certified watches for each Swiss brand. This is due to the brands’ demands to protect their privacy. However, in data released in 2015, here are the brands that have the most COSC-certified timepieces. Rolex comes first with 795,716 watches. Omega comes second with 511,861 watches. Breitling is third with 147,917 certified timepieces; 28,499 of these are quartz models. Swatch Group takes on the fourth and fifth place with Tissot and Mido. The brands have 96,563 and 49,962 models certified by COSC respectively. From there, we find a drop in the number of COSC certified watches for each brand.

Tudor has 23,003 while Chopard has 16,107 certified watches. Zenith, on the other hand, has 6,824 watches. Panerai has 6,262 watches certified by COSC while Bremont comes with about 5,860 watches on the list. Ball Watch Co. has 5,031, Carl F. Bucherer has 4,577, and Titoni has 4,146. Meanwhile, Christopher Ward has 3,362 certified watches, and Ulysse Nardin has 2,561. It’s unsure whether the data still is still accurate however, each of these brands boasts their collection of high precision watches.

Chronographs are functions within a watch to measure time for a certain event. Chronometers are high precision watches. Not all chronometers are COSC-certified; all COSC watches are chronometers. This tests may only be done to high quality, high precision Swiss watches. Watches that earn this certification have an average accuracy of -4/+6 seconds per day. Mechanical watches under a 15-day testing process while quartz movements undergo 13 rigorous days of intense testing. While it’s more expensive, watches may be tested on a watch head level or a watch without a strap.

But just because a chronometer is not COSC certified doesn’t mean that it’s less reliable. The COSC only aims to uphold the Swiss watchmaking industry and prove the country’s superiority in the business. Other chronometers from other brands, from other countries, are still worth looking at. At the end of the day, chronometers will always be the paragon of horology excellence, COSC certified or not.