It seems that Rolex is obsessed with nicknaming their popular watches. Some are named after beverages like Pepsi and Root Beer. While some take after our favourite superheroes like the Hulk. But this time, we’ll talk about the watch that’s named after the greatest superhero detective — the Rolex Batman.

Fortunately for us, the tricks and gadgets of this beauty are not hidden in a bat cave. So let’s try to explore every nook and cranny of this iconic timepiece. And by the end of this article, I bet you’ll be amazed enough to say “holy Rolex, Batman!”

But first, a history lesson. While Rolex didn’t have to train under the League of Assassins like Bruce Wayne, rest assured their watches are just as breathtaking.

It all started when the flight industry business started booming in the ’40s when pilots and aircrew needed a reliable timing device. But they didn’t need just any watch. It should be able to tell the time of two time zones simultaneously.

To address the issue, Rolex collaborated with Pan Am Airways to create the needed watch. Thus, the first Rolex GMT Master was born.

The first-ever Rolex GMT Master was called the Reference 6542. Basically, it was the Turn-O-Graph Ref. 6202 with an additional hand and the bezel switched out.

Originally, the ref. 6202 had a luminous bakelite bezel which broke easily. So to solve this issue, Rolex started fitting the watch with a metal bezel starting 1956. Another interesting thing is that this watch is famous for being in the James Bond film called Goldfinger.

Rolex introduced an update to the GMT Master in 1959 and called it the Ref. 1675. So what’s new about this model? For one, it had crown guards to avoid accidentally changing the time. Another upgrade is the “Superlative Chronometer Officially Certified” printed on the dial.

Apart from those differences, Rolex released the Ref. 1675 in different variations. Customers were able to choose between gold or steel. They also had plenty of strap options to choose from. Namely leather, Oyster, or Jubilee bracelet. 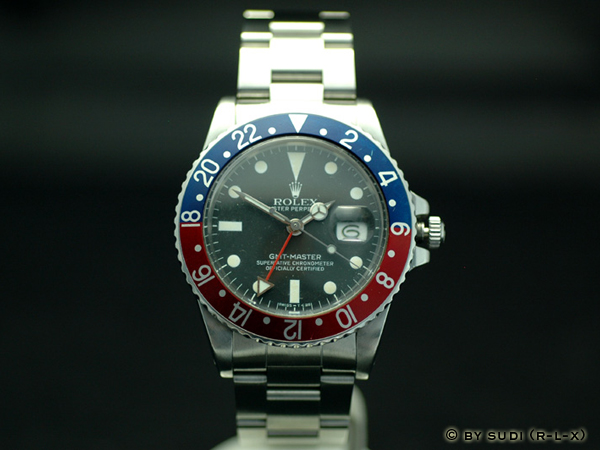 Further jacking up the GMT Master’s features, the brand introduced the Ref. 16750 in 1981. One major improvement was the calibre 3075 movement. It offers useful features like hacking and quickset date. It also has a higher water-resistance rating of 100m.

In 1983, Rolex produced a new generation of the GMT Master. They called it the Rolex GMT Master II Ref. 16760. Even though they had this new model, the brand continued to produce the original GMT Master until the end of the ’90s.

Despite looking similar, these two generations are very different on the inside. For one, the new kid features a rotating bezel. This lets the user keep track of a third time zone. It also uses a movement that has an independent hour hand. This can be moved in increments of one hour without disturbing the minute hand and the 24-hour hand.

In terms of aesthetics, the new GMT Master has a thicker case than the original. Which is why it earned the nickname “Fat Lady”. Despite being larger, customers found it visually better. 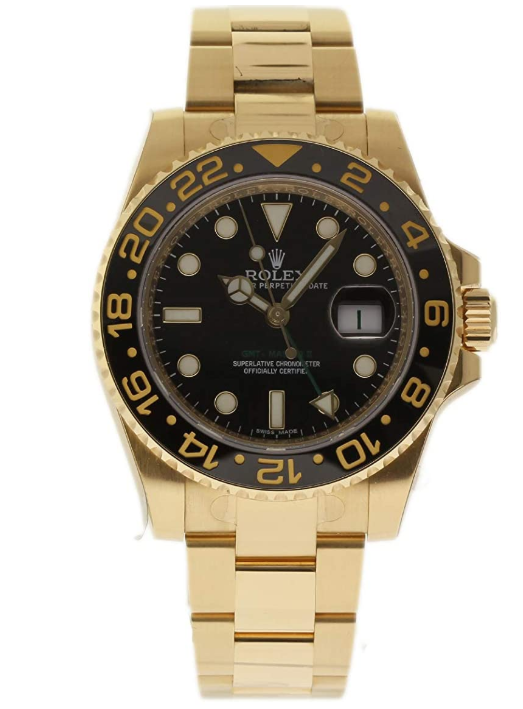 Not being satisfied is in Rolex’s genes. That’s why in 2005, they introduced an updated version of the GMT Master II. The first model was called the Ref. 116718 and was exclusively available in gold. And after a while, Rolex started upgrading it depending on the needs of the people. A few of those upgrades were the Triplock winding crown and their patented Parachrom hairspring.

In terms of appearance, the new bezel was made of hard ceramic material. As Rolex claims, it is virtually scratch and fade-proof.

In 2007, Rolex decided to offer the GMT Master II in stainless steel. And along with the new materials were new features. The highlight was a new movement called the calibre 3186, which included the new Parachrom Bleu hairspring. This hairspring is insensitive to magnetic fields and is more resistant to shocks than the average hairspring.

Other improvements include an anti-reflective Cyclops lens, a green 24-hour hand, a maxi dial, ceramic bezel with 24 clicks, and a new bracelet. 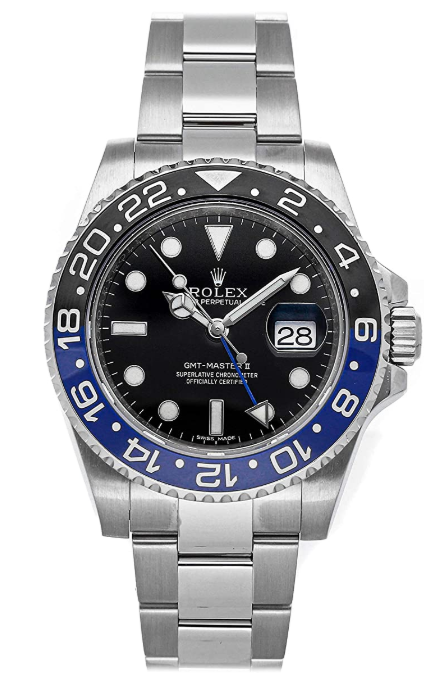 The use of Cerachrom (i.e. Rolex’s own version of ceramic) wasn’t new during that time. However, it was the first time they were able to achieve a two-tone bezel using that material. The end product was a richer and more saturated colour compared to the aluminium bezels.

Apart from being the first one to have a two-toned Cerachrom bezel, the Batman also became the only GMT watch that’s available in stainless steel for several years. During that time, the GMT Pepsi went from all-stainless steel to 18K white gold.

What’s in a name?

Of course, at first, the watch wasn’t called Batman. In fact, its official name is the Rolex GMT Master II Ref. 116710BLNR as mentioned above. That’s a very long name, but let’s make it easy to remember. The four letters at the end stand for “Bleu” and “Noir”. These are the French words for blue and black, respectively.

As to how it got the nickname Batman, the answer is very simple. It simply shares the colour scheme that’s associated with the Dark Knight. A few watch collectors also call it the “Bruiser” and “The Dark Knight”.

Different as Night and Day

You might be thinking that the black and blue combination is just for show. The truth is, it has a very useful function.

As we all know, the Rolex Batman is a GMT watch that tells the time from different time zones. And to tell the time more efficiently, we need an indication if it’s in the AM or PM. This is exactly where the two-tone bezel comes in. While the blue part stands for “day”, the other half means “night”. 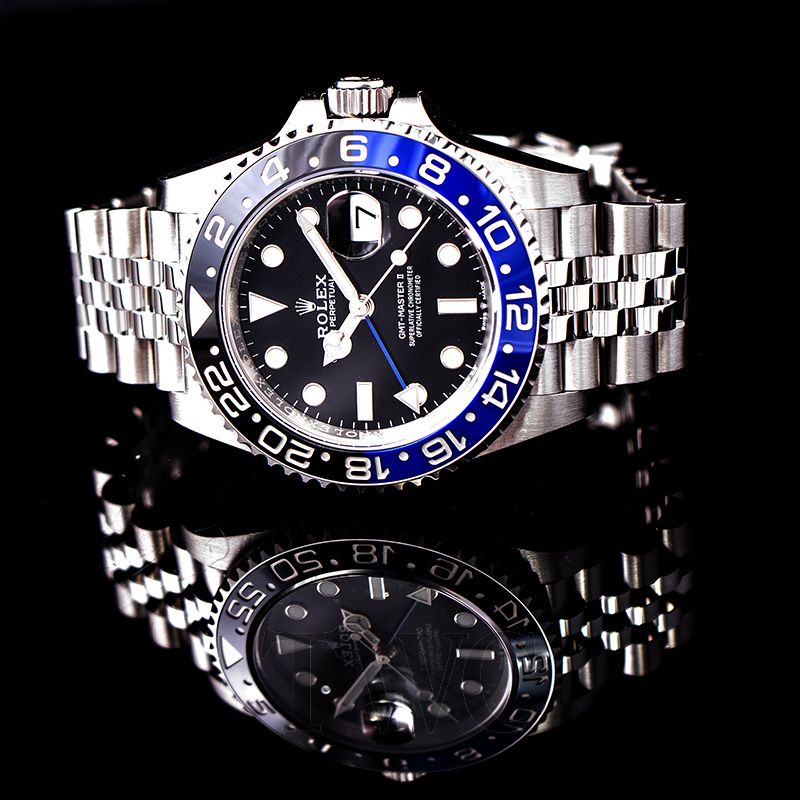 At first glance, the Rolex Batman 126710BLNR and the Ref. 116710BLNR look identical. But believe us when we say that Rolex has switched a lot of things up on the new version. Now, let’s take a look at these upgrades one by one.

The watch’s case is one thing that Rolex did not touch. It has exactly the same dimensions — 40mm in diameter and 12.5mm in thickness. Its famous black and blue ceramic bezel is also the same as it wouldn’t be the Batman if not for it.

Like other Rolex models, the material used for the case is called Oystersteel. It belongs to the 904L steel family and was specially developed by the Swiss brand. As expected of the brand, this type of steel is extremely resistant to corrosion and can maintain its beauty even in harsh conditions. 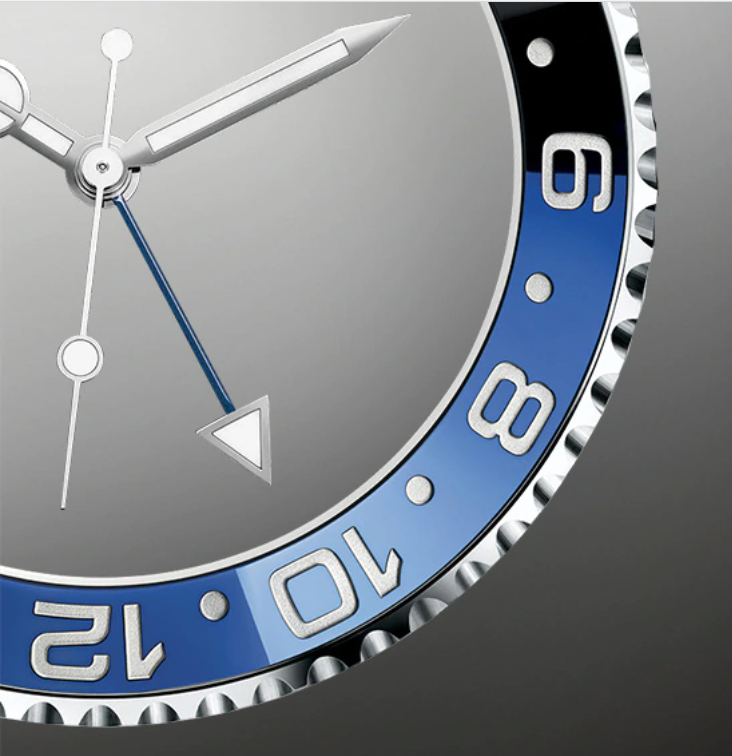 Like the case, the dial is barely changed. It bears the same black dial that offers exceptional legibility in any condition. Additionally, it has the Chromalight display that lets the wearer read the time easily in the dark.

But if you look closer, you’ll be able to see a small crown logo etched between the words “Swiss” and “Made” at the bottom part. This is a symbol that the watch is powered by the new-generation Rolex movement. 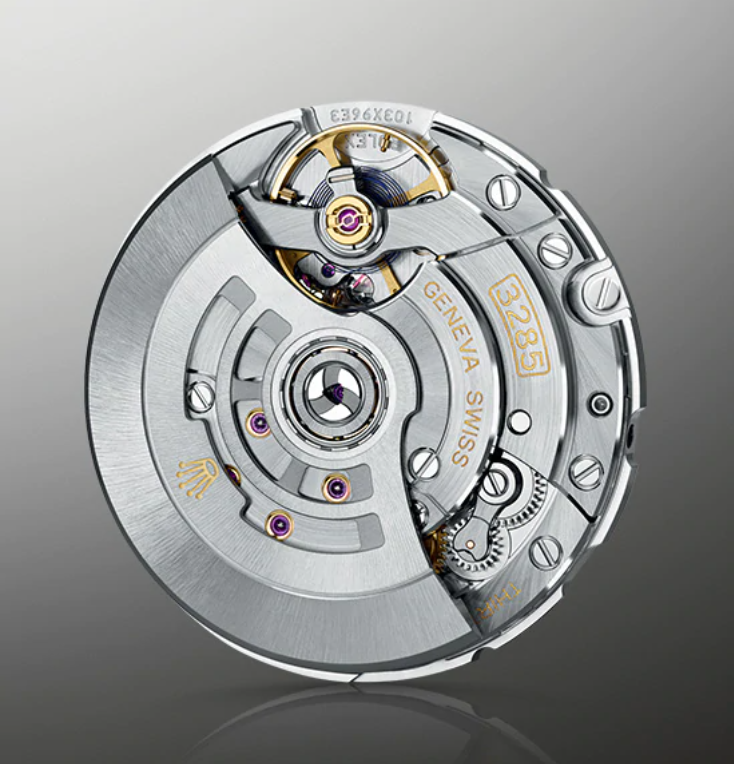 Speaking of the new-generation movement, it is called the calibre 3285. As you would expect from Rolex, it is a Swiss-certified chronometer. Furthermore, it is equipped with a Parachrom hairspring, which makes it more resistant to shocks and extreme temperature.

The calibre 3285 also offers a better power reserve. While the calibre 3186 found in the previous Rolex Batman offers only 50 hours, this one offers 70 hours when fully wound.

Another impressive thing about the calibre 3285 is its accuracy. With a rating of -2/+2 seconds per day after casing, this is one of the most reliable watches in the lineup.

Lastly, the movement comes with a 5-year warranty. If this doesn’t give you peace of mind, then I don’t know what will. 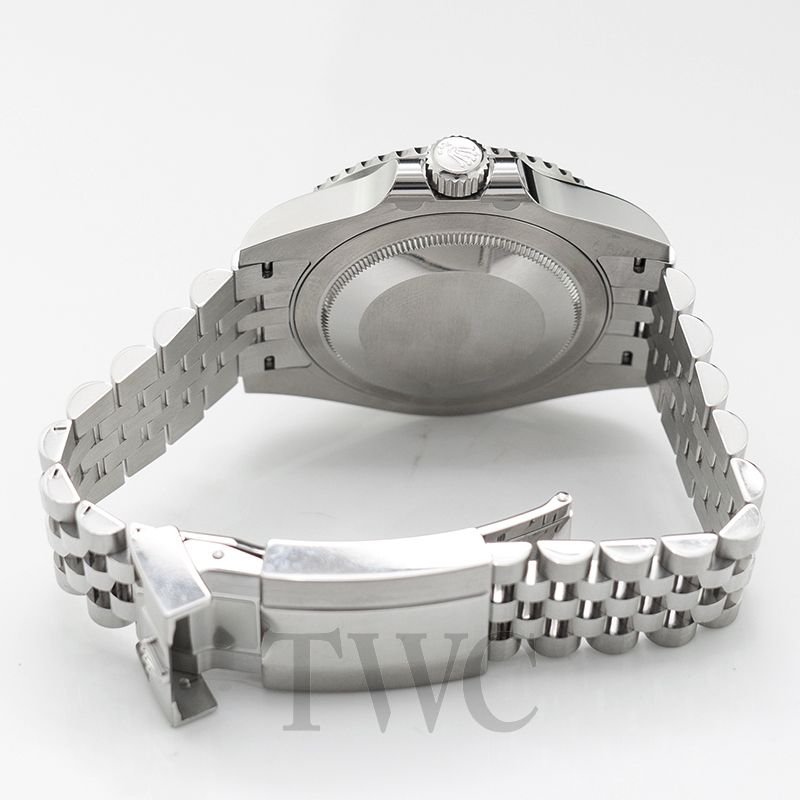 The most obvious upgrade on the Rolex Batman is the bracelet. When it first came out, the Batman came with the Oyster bracelet. It wasn’t surprising as most of Rolex’s tool watches were fitted with it. But this time, the new version features the 5-piece link Jubilee bracelet.

At first, Rolex created the bracelet for the Oyster Perpetual Datejust in 1945. It was meant to offer a dressier bracelet alternative which is why it was only available in precious metals. However, the times have changed and Rolex decided to incorporate the bracelet with their tool watches like the GMT Master II. Thus, they started producing them in stainless steel.

The wearer does not have to worry when it comes to comfort. It has the Easylink comfort extension link. This feature lets the user conveniently adjust the bracelet in increments of 5mm, offering a perfect fit on the wrist. Furthermore, it features the Oysterlock folding safety clasp which prevents it from accidentally opening. 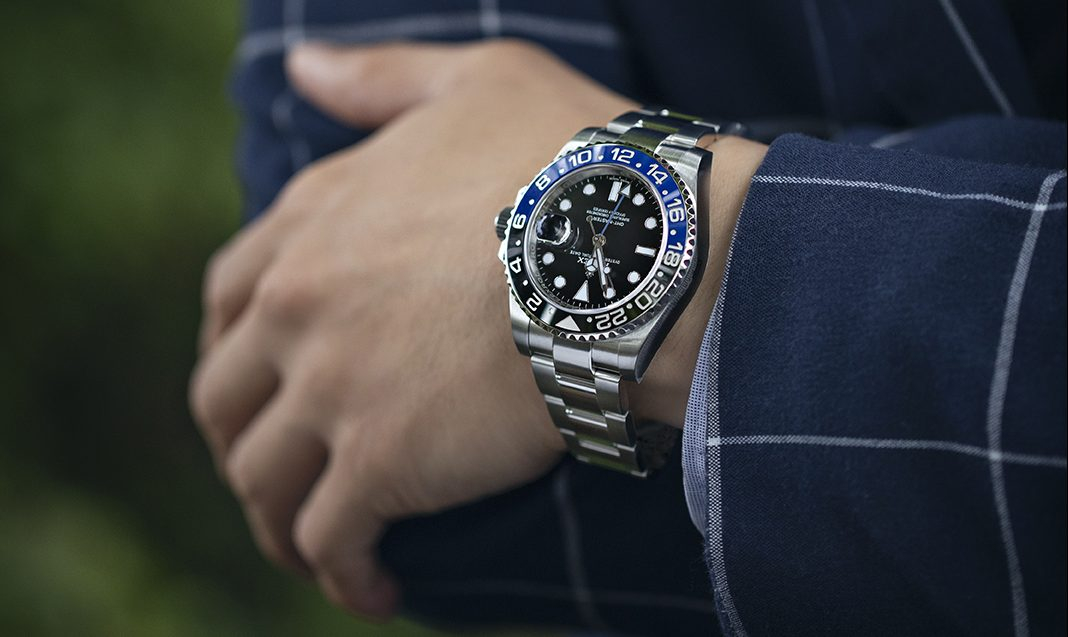 How to Check if Your Rolex Batman is Authentic

The Rolex Batman being a popular model also has its own share of drawbacks. For one, a lot of people would attempt to make a counterfeit. With that said, you must be extra careful in buying a second-hand model.

Lucky for you, there are a few things that you can do to check the watch’s authenticity. So before you bring out your hard-earned cash, don’t forget to go through these pointers!

1. The letterings should be precise.

Precision is Rolex’s middle name and that characteristic also applies to their finishing touches. Take a look at the lettering that’s printed on the watch’s dial. Each letter should be precise with clean edges. This can easily be seen under a magnifying glass.

Upon seeing the cyclops, watch enthusiasts will know in an instant that it’s a Rolex. While some watch brands have tried copying it, but only a true Rolex cyclops lens will magnify the date by 2.5x the normal size. Furthermore, the magnifier is centred above the number. This is not the case for a lot of fake watches.

But be careful. Some imitators have found a workaround to this. What they do is they print the date in a bigger font to make it imitate the magnified version of authentic watches. Try to peek the date from the side to avoid this trap.

Perhaps this is the easiest way to spot a fake Rolex. The caseback should be clean and free from engravings. It should also be made from metal and not sapphire crystal.

However, there are instances when the previous owner decided to put a personal engraving on it. For cases like this, it is better to ask.

4. The GMT hand should be sandwiched.

Another thing you should observe is the placement of the GMT hand. It should be in between the hour and minute hand.

Meanwhile, on a fake Rolex Batman, the GMT hand is usually under the other two hands and is sitting very close to the dial. The counterfeit movement inside the watch causes this limitation on the placement of the hand.

5. The crown should have a crown logo.

6. Bring it to a watchmaker.

It is important to note that you may encounter high-quality fakes. As technology advances, so do the skills of the counterfeiters. So to stay on the safe side, you can bring the watch to a Rolex service centre or a reliable watchmaker. They will gladly authenticate it for you.

The Rolex Batman is an icon not only because it has a cool nickname. Like the Dark Knight, it is reliable and is equipped with the technology you’ll need on a daily basis. We won’t be surprised if the world’s greatest detective keeps one in his utility belt.

Get to know another cult favourite by reading this article about the Seiko SKX007!