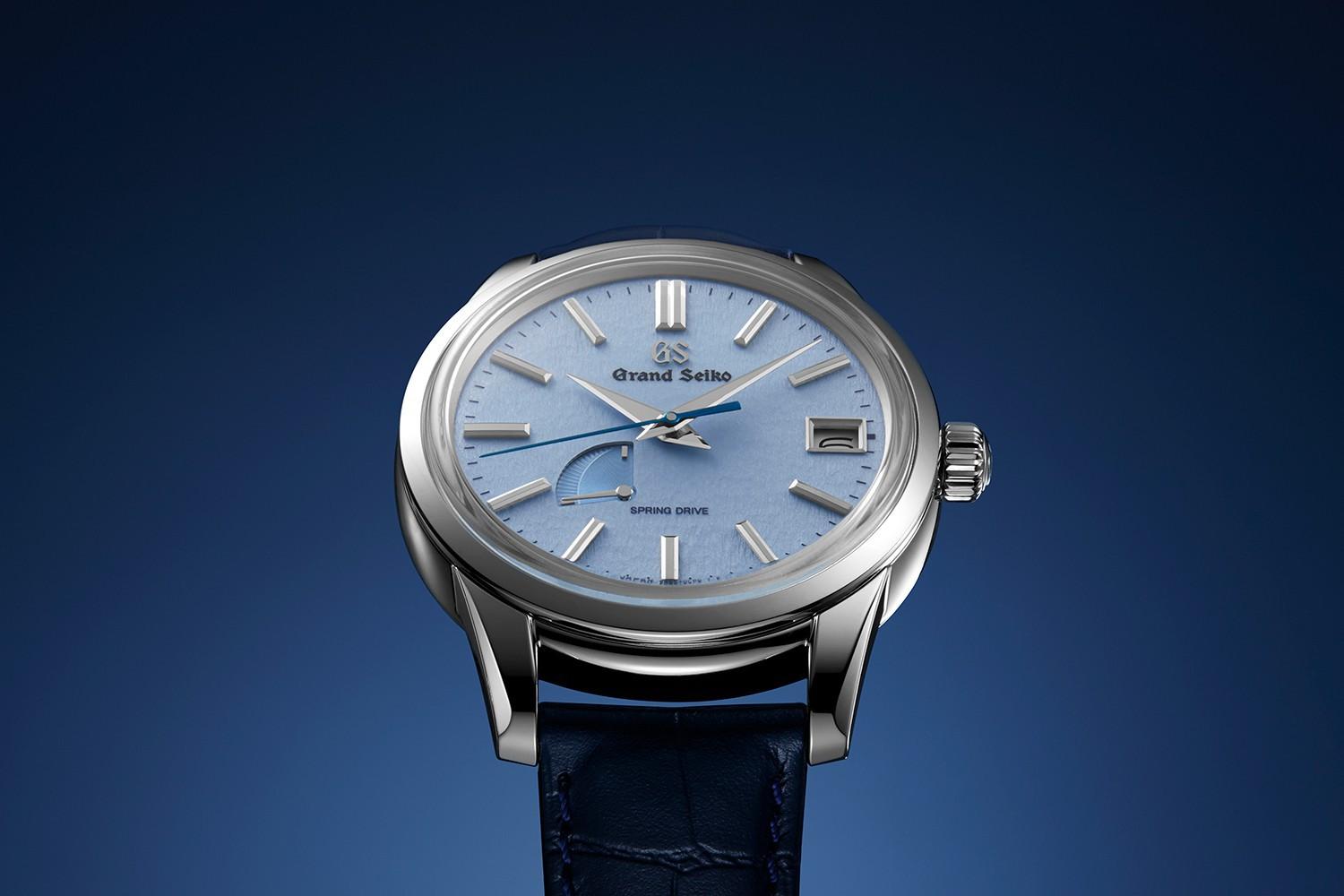 We all know Grand Seiko as one of the most well-established luxury watch brands in the industry. This Japanese company has years of horological history and experience under its belt, which is part of why it is so trusted and loved today.  Grand Seiko is known for producing numerous popular dress models, with famous names like the SBGA211 and the SBGY003, all of which are exquisitely and excellently crafted. Today, we will be taking a closer look at a watch that is also regarded as one of their most iconic pieces, memorably associated with the winter skies: the Grand Seiko “Skyflake” SGBA407.

The original SBGA211 Snowflake showcased elegant, luxurious aesthetics that immediately caught the attention of collectors and patrons. Given its immense popularity from the get-go, it is no surprise that the brand decided to build on this particular design, releasing different adaptations of the SBGA211 in the years that followed. This eventually led to the release of the SGBA407 Blue Snowflake, which is also dubbed the “Skyflake” by some watch enthusiasts.

A Closer Look at the SGBA407

The SGBA407 is part of Grand Seiko’s Elegance line. True to the collection’s theme, the SGBA407 is inspired by the beautiful winter season in Shinshu (Iwate, Japan), which is typically covered in snow. Aside from the abundance of ice and snow, this time of the year also brings an extraordinary landscape to Shinshu, with enthralling blue skies that create an optical illusion on the snow-covered mountains, like a true winter wonderland. This image is exactly what the Grand Seiko team saw outside their headquarters, and it became the very foundation of the gorgeous Snowflake and Skyflake models.

The SGBA407 Skyflake comes in a sleek 40.2 mm stainless steel case, with a standard thickness of 12.8mm that guarantees it will fit well on wrists of any size. Like the watch’s shaped lugs, the case features fine Zaratsu polishing, giving the Skyflake an impeccable lustre that shines under the winter skies.

Fitted on top of the case is a luxurious box-shaped sapphire crystal that keeps the watch face safe from scratches and impacts. On the underside of the Skyflake is a layer of translucent sapphire crystal that, in keeping with the watch’s name, comes in an alluring blue hue. This caseback gives you an up-close and personal view of the watch’s elaborate mechanisms and movement.

Moving on to the bracelet, the Grand Seiko Skyflake has a classic black crocodile leather strap with handsome dark blue stitching to add a bit more character to the watch. This strap is equipped with a three-fold clasp that has a push-button release, making sure that the watch not only rests securely on your wrist but can also be removed with just the push of a button. On the whole, this leather band adds a touch of sophistication that balances against the delicate watch face.

Moving on to the star of this watch, the Skyflake comes with a beautiful dial that is inspired by Shinshu, Japan’s winter utopia. It boasts a unique snow-textured design in blue that is reminiscent of the very landscape it was based on. Another cool thing about the Skyflake is that it was built with the interplay of light and shadow in mind. Depending on the varying angles from which you look at the watch and the ways the light hits its face, you are bound to discover new things about the Skyflake’s dial.

The Skyflake also has a very quintessential and straightforward dress watch dial design. It is adorned with slim rectangular indices, silver dauphine hands with a darker blue seconds hand to contrast against the sky-blue dial, and a date window at 3 o’clock that is outlined with silver. You can also find a small power reserve indicator on the left side of the dial, shaped like an elegant hand fan.

Other than its striking and memorable designs, Grand Seiko is also best known for its impressive technological innovations when it comes to movements. This applies to the SGBA407 Skyflake as well. The Skyflake is equipped with the 9R65 calibre which is an automatic spring drive movement. This means that all of its functions are powered by only a mainspring rather than an external power source, which makes it more efficient.

This 9R65 movement is known for its incredible accuracy of ±1 second per day, which is remarkable for a spring-driven piece. In addition, it comprises 30 jewels and boasts a whopping 72-hour power reserve.

The SGBA407 Skyflake has a price tag of around $6,030 USD, which is a fairly reasonable price for such a highly-regarded timepiece. Depending on the retailer, you can possibly get it for a slightly lower price, around $5,800 USD. That said, you can rest assured that the Skyflake is one of those watches that will retain its value in the years to come.

Why should you get the SGBA407?

If you still are not sure whether to get this watch or not, here are some reasons why you should really consider purchasing it.

Who should get this watch?

If you cannot seem to get your hands on the Grand Seiko Skyflake, here are some alternative models with a similar aesthetic or vibe. Just a disclaimer: no other watch can truly replicate the SGBA407, but the suggestions below come the closest in capturing the magic of the Skyflake.

The first piece on our list is the Grand Seiko Elegance SBGA211, also known as the Snowflake. Technically speaking, this can be considered a sister watch to the SGBA407 Skyflake. Born out of the same concept and originating from the same collection, the Snowflake is inspired by a different gorgeous Japanese landscape: the Hotaka mountains.

The SBGA211 Snowflake is presented in a 41mm high-intensity, lightweight titanium case and bracelet with a beautiful snow-textured dial in white. Its dial follows the same layout as the Skyflake, with slightly thicker rectangular hour markers, silver dauphine hands and a jet-black seconds hand that stands out against the snowy dial, a date window, and a hand fan-shaped power reserve indicator. As with the Skyflake, this watch is powered by a 9R65 spring drive moment.

If you want another watch that is truly representative of high-level Japanese craftsmanship and innovation, the SBGA211 Snowflake makes for a great alternative to the Skyflake. You can get your hands on this piece for around $5,900 USD.

Up next, we have the Garmin Vivomove 3S Ref. 010-02238-00, which is the only non-Seiko timepiece on this list. This piece stands out for being a hybrid watch that showcases both an analogue and a digital display. It comes in a 39 mm fibre-reinforced polymer case paired with a comfortable silicone strap in grey. As a hybrid watch, it also features a multitude of handy functions, from sensors and health monitoring to activity tracking.

This Garmin watch deserves a spot on this list because of its unique, granite blue dial that is as reminiscent of snowy landscapes as the Skyflake is. Although this watch has a much more casual vibe than the Grand Seiko Skyflake, it is a good option for those who want a sportier, multi-functional piece with a similarly-textured watch face. The best part is that you can get this for just $200 USD.

Lastly, we have the Seiko Presage SRPE19J1 which is a gorgeous dress watch with a design highly reminiscent of the Grand Seiko Skyflake. Like the Skyflake, this watch is a perfect representation of Japanese artistry. As part of the Seiko Cocktail Time range, this watch also has a very clever inspiration, specifically, the Skydiving cocktail drink.

This Seiko Presage watch comes in a 40.5mm stainless steel case and bracelet. This is paired with a beautifully-patterned sunburst dial in a light blue hue that is very similar to the Skyflake’s dial. As a typical dress watch, this piece’s dial also has a simple layout, with a three-hand system and date display that are both of which are powered by a self-winding 4R36 calibre. In addition, this movement is equipped with a 41-hour power reserve.

Since it has the same timeless, dressy vibe and aesthetic as the SGBA407, the Seiko Presage SRPE19J1 serves as a good alternative for those who want a timepiece similar to the Skyflake, but at a significantly lower cost. This particular model is priced at just $356 USD, which is much more budget-friendly than the Skyflake.

The Grand Seiko SGBA407 is one of the most beautiful Japanese-crafted timepieces out there. Every time you look at the dial, it is as if you are taken to the snow-covered mountains and lake of Shinshu, which was the inspiration behind this watch’s design. Ultimately, it is difficult to put into words how extraordinary this watch really is. Indeed, all we can say is that it is something enthusiasts and collectors should definitely check out.

If you want more guides and reviews, make sure to read our article on the Iconic Rolex Bluesy.