A Review of the Seiko Sumo: Heavyweight in the Dive Watches Arena 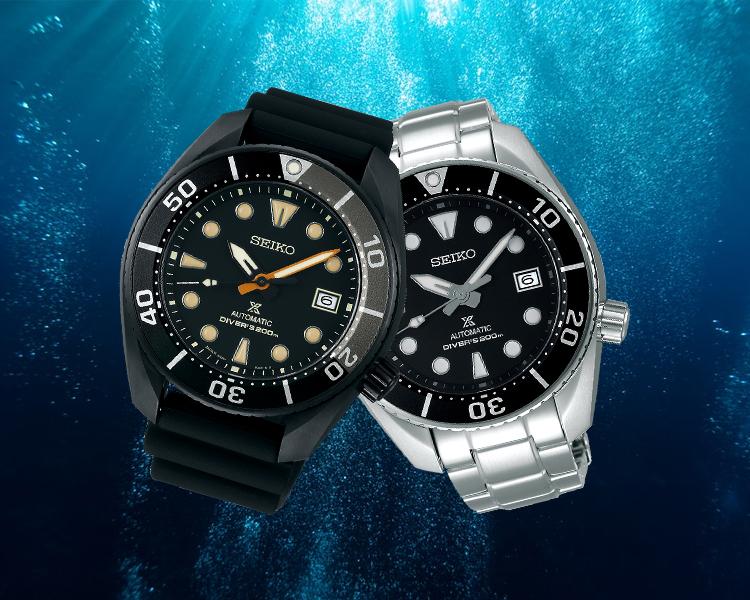 Seiko is, without a doubt, one of the most prominent brands in the watch industry. Not only do they stand out for their timepieces but they also supply other brands with parts for specific movements. From its humble beginnings in 1881, the brand has, indeed, become a worldwide giant. So, it’s no surprise how the company’s timepieces easily became favourites among collectors and casual enthusiasts.

One of the most powerful pieces they created is the Seiko Sumo, a series of watches under their Prospex collection. The Seiko Prospex Sumo made waves as soon as it launched in 2007. But what sets the Sumo apart from the watches in the Prospex collection? Moreover, what makes it a favourite among the many dive watches today?

Seiko has been manufacturing dive watches since 1965. As the company to produce the first-ever Japanese dive watch, they certainly left a mark in the industry. The company started with a self-winding 150m Diver’s watch. About a year later, the watch accompanied divers in the 8th Japanese Antarctic Research Expedition. Two years after the exhibition, Seiko stepped up their game with the Seiko Diver’s 300m. With research and experiments, the company successfully equipped the watch with a hi-beat calibre with 10 vibrations per second. Then, a letter came to the doors of the company that changed the history of Seiko forever.

A professional diver from the Hiroshima prefecture of Japan wrote to Seiko due to circumstances that he faced during expeditions. According to the diver, depths greater than 300 metres cause damage on watches due to the pressure. This pushed the company to produce a watch that can not only withstand great depths but also work under pressure — literally.

Years later, in 1975, Seiko launched the first professional Diver’s 600m. Not only does it serve the diver’s needs to be water-resistant but it also surpasses expectations with a titanium case. With the case made of such a strong metal, it, therefore, became corrosion-proof, shock resistant, and airtight. But Seiko decided there was no reason for them to stop innovating the watch. So, in 1978, the company launched the Professional Diver’s 600m with a quartz movement.

For decades, Seiko continued to create watches that cater to divers, both professional and recreational. For example, the Hybrid Diver’s 150m. In 1982, Seiko showcased an alarm system, chronograph, and a bilingual display in this watch. In addition, Seiko also produced the world’s first-ever computerised diver’s watch in 1990.

The Birth of Seiko Sumo

With this in mind, it’s no surprise that Seiko is one of the favourite brands among divers. They continue to innovate through the years to keep up with the changing times. So, when the company released the Seiko Sumo, it became one of their best-selling offers; for all the good reasons, too.

The Seiko Prospex Diver 200m SBDC031 sounds like a mouthful to say but it was easily one of the best. As Seiko’s mid-tier Prospex watch, it sits just above the Seiko Turtle and the Seiko Samurai. While it’s comparable to the Turtle in looks, its movement varies from the two entry-level Prospex watches. However, as a mid-tier watch, it’s no Marine Master 300m. Not only is the SBDC031 lower in water-resistance but it also has no sapphire crystal. But recreational divers still get to enjoy its 200 metre water-resistance.

Origin of the “Sumo” Nickname

Given that ‘SBDC031’ can be quite a mouthful, patrons immediately gave it a nickname. It immediately picked up with a catchy nickname: Sumo. There are tons of theories surrounding the nickname. However, the brand is not confirming anything.

For instance, people refer to its bulky feature as one of the reasons. Not only is it 44mm in diameter but it also weighs 170 grams. The watch, therefore, isn’t suitable for small wrists. Moreover, the case looks bulky together with its 20mm band. Another theory suggests that the 12 o’clock marker looks like a ‘Mawashi‘. This refers to the underwear worn by sumo wrestlers during a fight. In addition, Sumo’s blue sibling gains an apt nickname: Blumo.

The Edge of a Heavyweight

The Seiko Proxpex Sumo certainly has its edge even as a mid-tier watch in the collection. Enthusiasts deem it as one of the best men’s dive watches not only for its unique look but also for its fine details.

If it’s your first time looking at the Prospex catalogue, it could be hard to spot the Sumo. The Seiko Sumo has a defined case. It is, after all, the most prominent part of the Sumo aside from its 12 o’clock marker. Its bulkiness stands out with the soft edges that make it easily distinguishable at first look. A lot of people easily confuse it with the Turtle; however, the Turtle has rounded edges. The Marine Master could easily be its twin if not for a different 12 o’clock marker. So, if you need to spot a Sumo from a sea of Prospex watches, look for the Mawashi marker!

Older models of the Seiko Sumo have the Calibre 6R15 underneath its bulky case. This automatic-winding movement has 50 hours of power reserve. Moreover, the movement has 3Hz frequency and a central rotor for the automatic winding. The movement also allows for a quick-set date feature and a stop-second device.

2019 Improvements to the Sumo

After 12 years since the launch of the first Seiko Sumo, the company finally released an updated version of the watch. At Baselworld 2019, the brand launched the Prospex ‘Sumo’ SPB101 and SPB103.

For the most part, it doesn’t veer away from its predecessor that is the SBDC031. The stainless steel case still features smooth polishing and brushing details. The new Sumo watches are also water-resistant for up to 200 metres below sea level. In addition, the new models still use the LumiBrite to illuminate the hands and marker for optimum readability even in the dark. Noticeable at first glance, it should also be mentioned that the SPB101 has an anti-reflective coating. Meanwhile, the SPB103 has a sunburst effect to it, making reflections look stunning especially underwater.

Moreover, both the new Sumo watches are also ISO-certified watches, just like the first Sumo. To illustrate, the watches have a unidirectional 60-minute bezel to easily monitor the duration of your dive. You’d also appreciate the screw-down crown, as well as the aluminium bezel insert. These surely make the watches more durable versus other dive watches. The band is a three-link, stainless steel bracelet that comes with a dive extension that could perfectly fit with your wetsuit. Indeed, these features are already a lot to take in but there’s still room for improvement for the Sumo.

However iconic the bulkiness of the Sumo is, the Sumo takes it a notch down when it comes to weight. It now sits ever more comfortably on your wrist. This makes the watch suit some wrists that are on the more delicate side. However, it’s still bulky. Yet, the watch has become thinner at 12.5 mm. This is possible due to the automatic 6R35 movement. This calibre made its debut in these Sumo watches but it’s nothing short of amazing. The new movement gave the new Sumo watches a 70-hour power reserve. That’s 20 hours more than the past movement. For two days, you can now leave your Sumo uncharged for almost three days. Now, that’s a big step-up from the last movement.

In addition, the new Sumo watches also have thinner hands and markers. These changes certainly make the dial look more spacious than ever. Moreover, a new sapphire crystal protective glass replaced the Hardlex protection of the dial. This is the closest you can get to the Marine Master!

Seiko Sumo Watches To Check Out

Besides the two new Sumo watches, there are a few more that could catch your attention. If you think Seiko Sumo is just about being your basic dive watch, you’d have to think twice. As a matter of fact, the Seiko Sumo is far from basic. Aside from its ISO-certified features, you’d surely enjoy additional features such as limited edition colourways and solar-powered movements!

This limited-edition Sumo should definitely be in your collection. Not only does it feature a unique black colour versus other Sumo watches, but it also has all the things you love about the Sumo. Like the SPB101 and SPB103, the SPB125 has the calibre 6R35 underneath its iconic case. It’s improved with the new colour black to suit Seiko’s new line of limited-edition black diving watches. Moreover, it has a black silicone band that makes it even sturdier. It’s truly sportier than the other Seiko Sumo watches. And as always, it fails to disappoint. In addition, you can find the words “LIMITED EDITION” on the caseback.

A step-up of the SPB125, the SSC761 is another limited-edition Sumo you should be checking out. Seiko offers only 3,500 pieces of this watch so competition to own it can be a challenge. However, the devil is in the detail on this one. The watch has the Calibre V192 underneath its case. This calibre is a solar-powered movement from Seiko. If you’re concerned about the sustainability of your watch, then this should be the Sumo watch of your choice. It can operate for about 6 months at a fully-charged capacity. But solar-powered watches do have a downside as well. Good thing Seiko equipped the SSC761 with an overcharge prevention function. So, you can be at ease that it won’t malfunction due to overcharging!

And because the SSC761 is a chronograph watch, you’ll find multiple sub-dials on it. Aside from the iconic design of the main dial, you also get a sub-dial that features a Chronograph up to 60 minutes in 1/5 second increments. The date display has been moved just past 4 o’clock from the 3 o’clock marker. This is to make way for the 24-hour sub-dial. You may also see how much power your watch still has at just a click of a button. Efficient, sustainable, and stylish — it’s just everything you would need in a dive watch.

Do you like the more basic design of the Seiko Prospex Sumo but wish there was a chronograph function with it? The Prospex SSC757 has exactly just that. You get the classic Seiko Sumo look plus a chronograph function. Just like the classic design, both the case and bracelet are made of stainless steel. The bracelet also has a three-fold clasp with a secure lock to make sure it stays on your wrist, even during a dive. It also comes with an extender that will fit your wetsuit just right. Moreover, just like the SSC761, this watch also has the Calibre V192. So, you’ll get the same solar-powered movement and chronograph feature without having to worry about the carbon footprint you leave behind.

The dial of the watch looks and functions just about the same as SSC761. Therefore, it also has a 24-hour sub-dial and a chronograph with up to 60 minutes in 1/5 second increments. The date window is still present, as well as the resuming electric power generation display that can be accessed through a button.

The Heavyweight Among Diving Giants

There are a lot of diving watches in the market today. The most prominent names also cost 20 times more than the Sumo. And while different watches offer different functions and features, the Seiko Sumo never runs short when it comes to reliability and affordability. For a watch that is significantly cheaper than other watches of the same tier, it’s easy to understand why it’s a favourite among enthusiasts.

The Sumo doesn’t only weigh heavy on its physical bearing but it also provides features that make up for it. So, if you’re looking for a watch that provides accuracy underwater without having to dish a lot of money, the Seiko Sumo is for you.