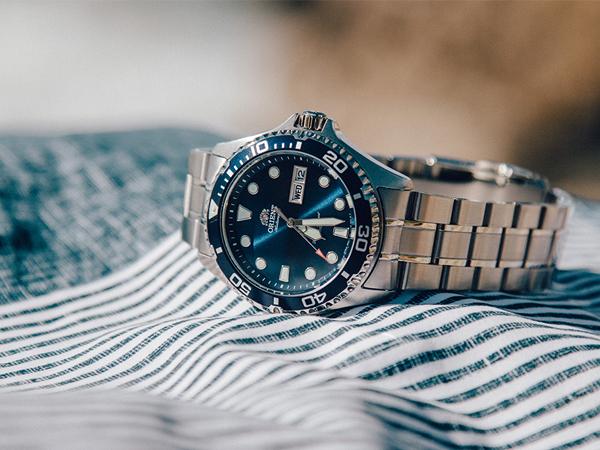 A good dive watch is hard to come by. Collectors and dive enthusiasts would only refer to select timepieces that could meet their standards. Some of the most notable dive watches include the Rolex Submariner as well as the Seiko SKX series. The SKX presents itself as an affordable version of the Submariner. But what if we tell you that there’s an even more affordable alternative to the SKX? Enter, the Orient Ray II.

Upon seeing improvements to the Orient Ray II, more and more people are starting to appreciate its value. For one, it has a better movement with the same classic design people love about its predecessor. It has also gained a reputation deemed on par with the well-known Seiko SKX007 and SKX009. So, what’s with this diver that makes it such a sought-after watch?

A Quick Look at the Orient Ray II

Every collector owns a dive watch. It is, perhaps, one of the building blocks of a great watch collection. But before anyone ever buys a Rolex or a Blancpain, it’s a great step to purchase an affordable diver first. A favourite among collectors, the Seiko SKX proved its status as one of Seiko’s iconic timepieces. However, it’s not the most affordable diver either. Then comes Orient, also a Japanese brand that produces equally amazing timepieces for a lot less.

Since the improvements to its predecessor, the Orient Ray II became a favourite among collectors. According to many, it’s a great alternative to the SKX for a few reasons. Firstly, it almost has the same specs, even the sizes. Moreover, both have great movements. But the greatest difference lies in the price as the SKX costs twice as much as the Ray II. Despite that, what makes Ray II the easier choice among the two?

Specs of the Orient Ray II

The Orient Ray II isn’t as fancy as the Rolex Submariner. But for a timepiece that looks similar to the iconic diver, it’s definitely a real bang for the buck. Apart from its affordable price, it comes with wonderful features that a lot of collectors — whether seasoned or amateur — adore.

Dial: Mineral crystal protection, with a day-date function and lume on hand, markers, and bezel

Orient took its time developing the Orient Ray II — one of the most popular choices for entry-level dive watches. Indeed, this affordable watch, priced only a little over $100, is a compelling choice. But what makes it so popular among collectors? What do you have to compromise for its value?

The case of the Ray II comes with a sporty look that’s very familiar to fans of dive watches. It has an almost identical silhouette as the Submariner. The stainless steel case comes at 41.5mm in diameter with a lug-to-lug size of 47mm.

The timepiece seemingly hugs the wrist when worn. The lugs, which are angled downwards, allow for a snug fit and comfortable all-day wear. The size of this watch, however, doesn’t fit the typical diver with at least 42mm. The little difference makes it a little hard to manage, but its functions remain intact. Despite being small, the screw-down crown, protected by crown guards, ensures the depth rating of the watch at 200 metres.

The mixed textures of the timepiece give it a bit of flair, but this is very similar to other sports watches. It has a polished finish on its sides, though only the top of the case features a brushed finish. This contrast adds a classy vibe to the watch. At a glance, the Orient Ray II is your quintessential sports watch, only a tad smaller than the Seiko SKX. It comes at the same size as the Orient Mako II — from the diameter, thickness, and lug-to-lug size.

As expected from any dive watch, the Orient Ray II also features a 120-click unidirectional rotating bezel. The bezel includes an aluminium insert as well as a luminous pip at 12 o’clock. This makes it legible even in the dark. The coin edge of the bezel also makes grip easier for better operation, even when wearing a wet suit. However, it’s not your typical coin-edged bezel. Every ten minutes, the notch appears big. But since it doesn’t stick out of the case, it can still be hard to operate.

Orient’s iconic dolphin logo appears on the solid caseback of the watch, while a mineral crystal sits atop for protection. Sure, it’s not an anti-reflective sapphire, but it provides enough protection with utmost care. After all, upgrading the crystal to sapphire can be too pricey and may affect the overall price of the Ray II.

The Orient Ray II FAA02003B9 model also comes with a PVD-coated case for a more rugged effect. This version is nicknamed after the ‘Raven’ for its deep-black hue that’s reminiscent of the bird.

There are two different colours available for the Orient Ray II. Firstly, the Orient Ray II FAA02004B9 features the popular black dial that matches that of a Rolex Submariner. Then, we have the Orient Ray II FAA02005D9 in deep, dark blue. Both dials come in matte textures with a tad shine if seen from certain angles. They also have a chapter ring to add depth and dimension to the dial. Overall, the texture of the dial is surely unique and one to look out for.

The applied indexes of the Ray II comes in circles at every five minutes except at 3, 6, and 9 o’clock positions. Each marker, however, comes with a similar polished chrome edge with a very generous amount of lume. At 3 o’clock, you’ll find the day and date window with a similar frame metal for cohesiveness. The day and date are printed black on white except for Sunday, which is printed red on white.

The hour and minute hands are just like any other sports watch’s hands. They’re large and filled with lume for better legibility. The second hand’s tip is triangle-shaped with a red edge for contrast that adds a bit of a personality to an otherwise simple timepiece. Not to mention, red has always been present in most sports watches. Putting it on the date window and the second hand is a good way of incorporating this colour into the watch.

The prints on the dial are pretty simple and kept to the minimum, with only the recognisable Orient logo and text at 12 o’clock, plus the word ‘Automatic’ written underneath the branding. South of the dial you’ll find the words ‘Water Resist’ and ‘200m’.

In general, the dial of the Orient Ray II is neat and not crowded. It has great dimensions and most importantly, a bright green lume. The blue dial is striking with its quality that’s almost reminiscent of the ocean, while the black dial is a classic that you’d want to have in your collection.

When the Calibre F6522 movement was launched, Orient repackaged its original Ray timepiece and equipped the new timepiece with the new and improved movement. Thus, the launch of the Orient Ray II and Mako II. This automatic mechanical movement is powered by a rotor with 22 jewels.  The accuracy of the Calibre F6922 movement functions within -15 second to +25 seconds per day. To prove this, the watch was tested at room temperature with the mainspring wound fully with the dial positioned up. To test this yourself, Orient suggests a week of testing the watch rather than just a day.

The Caliber F6922 features 40 hours of power reserve and more. To fully achieve this, one must wind the crown 30 times to fully wind the spring. Moreover, this movement includes hacking seconds and hand-winding, present in any modern-day automatic movement. Not to mention, it’s made in-house at Orient Japan.

On the other hand, the tapers on the bracelet make it comfortable to wear, but it can still be improved in certain ways. The great thing about it, though, is the availability of NATO and rubber straps for the Ray II due to its generic lug width. It easily solves the bracelet issue and puts the focus back on the great qualities of the watch.

Not all automatic dive watches are created equal. Sure, the Ray II came out at the same time as the Orient Mako II, but it stands out more for its reliability. Despite being a few more dollars expensive than the latter, the former continues to impress enthusiasts even to this day. A classic look and reliable movement already put the Orient Ray II at the top of the list of many. So, if you’re planning on buying an entry-level dive watch, you would want to check it out.

There’s no denying how Orient produces timepieces that last. Even if you wear it every day or through challenging adventures, the Ray II can surely keep up with your demands. It’s also very versatile, given its classic sports watch design. Not only can you wear it on a weekend trip but also designate it as your 9-to-5 timepiece. There shouldn’t be any worry about pairing it with a suit or casual attire. However, given its price point, it’s understandable that you’ll have issues, such as its mineral crystal and bracelet. It is reliable, yet it’s still more prone to scratches than your luxury watch. But with great care, this watch will surely persist. Either way, for half the price of a Seiko SKX or a portion of the price of a Rolex Submariner, you’ll still get a reliable timepiece.

Is the Orient Ray II Mod-friendly?

Modding has long been a tradition for collectors. Not only luxury watches but also more affordable watches get great mods that further boost their prices and ultimately improve the timepieces in general. With that said, we all know how the Seiko SKX is the holy grail of watch mods. This rests on the fact that it’s easier to find parts for the SKX compared to other timepieces. Modding an SKX comes easier for many that’s why it’s a favourite by modders.

However, modding may not come as easy with the Orient Ray II. If you’re looking into modding your watch and in a search for a more affordable alternative to the SKX, the Ray II may not be the smartest choice. There isn’t much of a demand for modding the Ray II, that’s why parts are scarce.

Where to buy an Orient Ray II

There isn’t any shortage on the Orient Ray II, that’s why it’s available at such an affordable price on sites like Amazon and eBay. You’ll also most likely get a better deal on classified sites when purchasing watches of this price point rather than in-store.

Although both Orient and Seiko are from the same company, they function under different managements and directives. Both only share select similarities like having the same shareholders such as the Hattori family, Seiko Holdings, and Seiko Epson. Apart from that, they have nothing else in common. Accordingly, Seiko and Orient must be treated as two separate brands and if possible, refrain from associating them with each other.

Despite operating in separate ways, one may find great similarities between the two brands. Aside from the products, their most famous collections also seem to have very similar traits. The same applies to the Seiko SKX007/SKX009 and the Orient Ray II. The two are almost similar to each other, that’s why people easily refer to the Orient Ray II as a great alternative to the SKX.

Can’t get enough of this Japanese watch brand? Check out our reviews on other Orient timepieces: Orient Kamasu, Orient Mako, Orient Triton, and Orient Bambino.