Rolex Milgauss: A Watch For Scientists 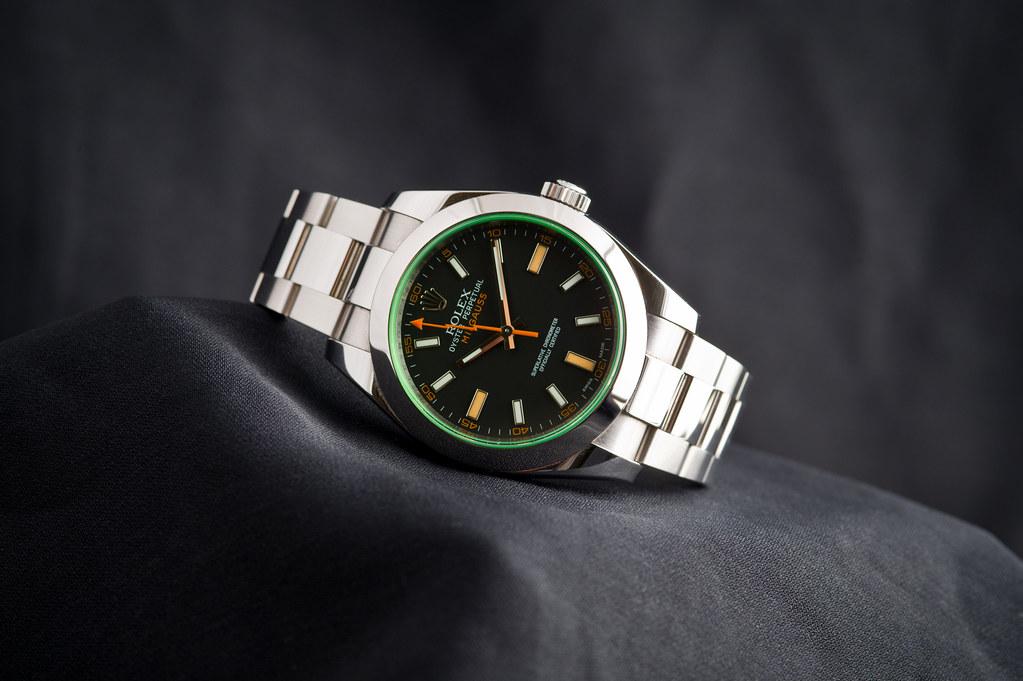 If I were to choose a watch for the Hulk or even Albert Einstein, it has to be the Rolex Milgauss. Not because it looks good or it has a lot of high-tech features nor does it have a lot of quirks a scientist will find useful, but because its history has a very special connection to science.

Rolex has created dozens of watches for all kinds of adventure-seekers. On one corner, they have the Daytona for the racecar drivers. On the other hand, the Sea-Dweller for professional divers. And if you look over there, you can see the Explorer for the cave adventurers.

They tried to cater to various types of niches. And one important group that they did not overlook was the science community. That is why they created a watch for people who spend hours experimenting in the laboratory. Thus, the Rolex Milgauss was born in 1956.

Watch Out for Magnets

If you’re working in a laboratory, then you have to be extra careful with your watch. Before the Rolex Milgauss, scientists had to remove their timekeepers before experimenting. Otherwise, they could risk ruining their favourite timepiece.

The magnetic forces would affect the movement of a watch, making it run faster than the usual and rendering it useless. Back then, watches could withstand only the amount of strength of a refrigerator magnet. So, imagine how much damage a laboratory can do to your watch.

The Rolex Milgauss is a watch where the designers put so much thought into. From its name to the second hand, every detail on the timepiece pays homage to its connection with science.

Read on to find out how the underdog became a collector’s item. It is the watch that even Rolex calls the “the watch par excellence of technological and scientific progress”.

What’s in a Name?

The founders of Rolex surely love making up names. And Milgauss is another proof. Just like the brand name itself, Milgauss is not a real word. It’s a combination of the French word “mille” and the scientific term “gauss.”

The word “mille” is a French word that means “thousand”. While Gauss is the magnetic field measurement. Combined, it implies that the watch can withstand magnetic fields of up to 1,000 Gauss. You could see how Rolex cared about even the smallest details such as sticking to a scientific theme.

During that time, most mechanical watches could only withstand from 50 up to 100 Gauss. Thus, people consider it a breakthrough, not only for Rolex but also for the scientific community. The European Organization for Nuclear Research (CERN) even confirmed its resistance. For some time, the Rolex Milgauss was the default timepiece of their scientists. The engineers from CERN even called it the “perfect magnetic shield”.

Shortly after, fellow Swiss brands Omega and IWC followed suit. They tried producing their take on an antimagnetic watch — the Railmaster and Ingenieur.

It Survived the Largest Laboratory in the World

Rolex went out of their way to prove that the Rolex Milgauss can truly withstand a magnetic force of up to 1,000 Gauss. To convince people, they sent the watch to none other than the world’s largest particle physics laboratory.

The engineers of CERN did some tests and experiments on the timepiece. After that, they confirmed that the Rolex Milgauss is strong enough to resist magnetic fields of up to 1,000 Gauss.

One detail that collectors often get incorrectly is the Milgauss’ first model. Many websites refer to Ref. 6453 as the first Rolex Milgauss model. This is incorrect as it is Ref. 6451.

The Ref. 6451 was introduced in 1956 albeit in very limited quantities. It is even estimated that they only produced, at most, 200 versions of the watch.

How Did They Do It?

What Rolex did was an admiring feat. But how exactly did they do it? The magic happens within the case. They used what they call the Faraday Cage to house the movement inside.

What it does is that it diverts the electric charges within the cage. The charges are then distributed so that they cancel its effect in the interior. It is a lot like how an aeroplane protects its passengers from lightning.

They named this innovation after its inventor, Michael Faraday. Up to now, a lot of watchmakers still use the Faraday Cage to make their watches antimagnetic.

It’s Not the Submariner

You might mistake Ref. 6453 for the Rolex Submariner. Before the Rolex Milgauss got its distinct style, the earlier versions of it looked a lot like something you would use when diving.

On its face, it had a rotating bezel with markers in divisions of 10s. If not for the word “Milgauss” printed in red on the dial, there’s no way you could tell it apart from the famous dive watch.

Shortly after the debut of Ref. 6453, Rolex released a second iteration. They called it Ref. 6451. It is still unknown why Rolex decided to give it a number lower than its predecessor. This is the reason why a lot of people incorrectly cite it as the first Rolex Milgauss.

The successor of Ref. 6453 still resembles the Submariner. However, they tweaked a few interesting details. The new iteration had a slight change in dimensions. But the most fascinating addition was the seconds hand.

Instead of a straight line, the watchmakers gave it a funky lightning bolt-shaped one. Sorry, Potterheads, but this isn’t a reference to the boy who lived.

This small change became the trademark of the Rolex Milgauss. As soon as watch enthusiasts see it, they would automatically know what it is.

The seconds hand may just be a tiny part of the watch, but it is the one that made it easily recognisable. It is wonderful how a very minute detail gave the watch so much character.

If you’re enjoying a night at the cinema and you look at your watch, you would see its indexes glowing. You can thank the radioactive tritium for that.

Unfortunately, the radioactive material used to make it glow can interfere with scientific experiments. That is why in the 1960s, CERN requested Rolex to make a special watch for their engineers and scientists.

Obligingly, Rolex produced Ref. 1019. Like the two previous models before it, Ref. 1019 measured 38mm. It also had the same Faraday Cage construction. Apart from the radioactive lume, what went missing was the lightning bolt hand. Instead, they replaced it with a red-tipped arrow.

Apart from those, another big difference was the hour markers. They replaced the simple dots with thick rectangles. These hour markers look a lot like the current versions of the Rolex Milgauss.

People think that Rolex made a mistake by removing the lightning bolt hand. By removing it, the demand for the Ref. 1019 declined during that time. But in recent times, it is one of the most wanted vintage Milgauss because of its rarity and association with CERN.

You Don’t Always Get it Right the First Time

Despite its current value, the Rolex Milgauss was not popular the whole time. There was even a time when it became so underappreciated that you could get your hands on a Rolex Milgauss for free! Watch sellers used it as a bargaining chip to sell the more in-demand Rolex models.

Due to its low sales, Rolex decided to remove the Milgauss from its catalogue. For almost two decades, no news was heard about the watch. The watch community almost forgot about it until 2007.

It had been 19 years after Rolex stopped selling the Milgauss. Nobody ever expected Rolex to revive a watch that became a flop. That’s why it shocked a lot of people when they announced a comeback for the model. To pay homage to its connection with science, they even released it in time to celebrate the completion of the Large Hadron Collider in Geneva.

During Baselworld 2007, the Swiss brand introduced a revamped look of the Rolex Milgauss. What the people saw surprised them. The new Milgauss looked a bit different than the traditional classy Rolex models. “Fun”, “quirky”, and “eccentric” are the words you can use to describe them. It came in three different versions. The first one had a black dial. The other one, a white dial. The third one was an anniversary edition. It had a black dial with a green-tinted sapphire crystal called the GV. We’ll get to the GV later!

Although the new iteration looked a bit unique, its appearance was a combination of its predecessors. It borrowed the rectangle hour markers from Ref. 1019. On the other hand, it inherited the Ref. 6453’s lightning bolt seconds hand. But this time, they gave it an electrifying orange colour.

While the 38mm size of the older Rolex Milgauss was considered large during the 50s and 60s, 2007 was a different era. To keep up with the times, they gave the new model of Rolex Milgauss a slightly larger frame — 40mm to be exact.

But its size wasn’t the only upgrade. The Ref. 116400 was equipped with the COSC-certified Calibre 3131. This innovation made it the first Rolex Milgauss to have anti-magnetic technology in the movement itself. Aside from that, its parts are also made from paramagnetic materials. This made the watch resistant to more than 1,000 Gauss.

To add more fun to the Rolex Milgauss, they engraved a special text on the magnetic shield. It was the symbol for magnetic flux density (the letter B with an arrow on top). Sadly, you cannot see it in plain sight. You would still have to ask a certified Rolex watchmaker to access it.

Along with the rebirth of the Rolex Milgauss line, the brand also included a special anniversary edition called the Ref. 116400GV. The last two letters stand for “Glace Verte.” In English, it means “green glass”.

One fun fact about the Glace Verte is that Rolex did not even bother to patent it. If you’re thinking that Rolex became too lazy to do that or their lawyers overlooked it, then you’re wrong. The Swiss brand claims that it’s so hard to make that it’s impossible to replicate it.

To demonstrate their confidence, Rolex did not etch the crown logo at the 6th-hour marker. For other models, this is a sign that the watch is fake. True enough, no other watchmaker has copied it.

In 2014, the brand introduced a new colour for the Rolex Milgauss line. They called it the Z-Blue dial. Its electric blue dial was coated with zirconium and is tinted with green crystal-like the previous model. This is one of the most colourful models in the catalogue and has caught the hearts of many watch enthusiasts.

From Zero to Hero

The Rolex Milgauss may have come off to a shaky start. The low sales of its first versions almost killed the entire line. But despite the setbacks, the Milgauss came back stronger. Its rarity even contributed to the increase in its value.

Indeed, its quirky looks cannot please everyone. However, there is no denying that this watch represents the technological innovation that Rolex is capable of. And this is what makes the Rolex Milgauss a true collector’s item. Right now, it is one of the most sought-after models of Rolex.

Ever wondered where some of the Rolex nicknames come from? Read our feature here.