A Guide to the Quirky Rado Captain Cook Dive Watch

When it comes to dive watches, Rolex Submariners and Omega Seamasters often steal the limelight. However, there is one vintage-inspired watch model that should not be overlooked — the Rado Captain Cook. You can even call this dive watch a wallflower that has its own quirks and eccentricities. Find out below why this underdog deserves your attention.

The popularity of dive watches peaked during the ’50s and ’60s. With that said, a lot of brands have their own iconic versions of the sports watch. Of course, there’s the renowned Rolex Submariner, the Blancpain Fifty Fathoms, and even the Zodiac Super Sea Wolf. In an attempt to ride the dive watch wave, Rado introduced their own contender in 1962 — the Rado Captain Cook.

Staying true to its theme, the Rado Captain Cook was named after the 18th Century British explorer and cartographer, Captain James Cook. During his lifetime, he was able to sail across uncharted areas of the globe. In a way, maybe this was symbolism for Rado because creating a dive watch was new to them back then.

A Watch Made for Divers

Nowadays, calling a watch a diver does not necessarily mean that people use them for their intended purpose. However, the Rado Captain Cook was definitely made for diving. It has everything a diver would need — 220m water resistance rating, automatic movement, and a unidirectional bezel.

While its specs are standard, what made this watch a looker is the inward sloping bezels. In fact, this design was used in several of Rado’s models during that time. Apparently, divers from the past loved this design, which contributed to the Rado Captain Cook’s iconic status. Furthermore, the small rotating anchor at the top also caught the audience’s attention. Both of these design cues would go on to be staples in future models.

The Modern Version of the Rado Captain Cook

At Baselworld 2017, the Swiss brand took the stage by storm by reacquainting us with a modern watch that’s inspired by the famous Captain Cook. And when we said “modern”, we only meant the inside of the watch because it definitely looks a lot like the ’60s version of the Rado Captain Cook.

By this time, Rado has upped its research when it comes to materials. The new models now use high-tech ceramic for their bezels, which make it more durable. Let’s find out what other new surprises the Rado Captain Cook watch has for us.

Up Close with the Rado Captain Cook 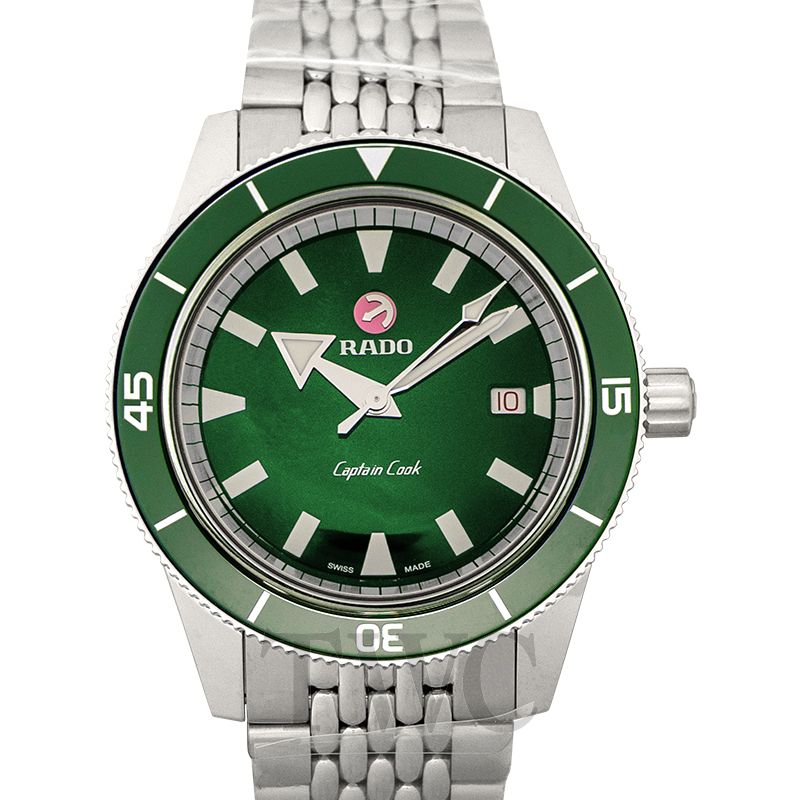 The ’60s version of the Rado Captain Cook comes in a 37mm case, which is pretty common during that era. But to fit in today’s trends, the Swiss brand decided to give the size a boost of up to 42mm. Despite the added 5mm, this watch’s face still bears the same retro styling as the original model.

When it comes to height, this model measures only 12.1mm. This makes it easy and comfortable to wear. In fact, it can still fit well with slim wrists. Furthermore, it contains a screw-down crown at the side to prevent water and moisture from entering. With that said, this allows the watch to achieve a 200m water resistance rating.

When it comes to the dial, this version of the Rado Captain Cook is as vintage as it can get. In fact, it looks like an accurate reproduction of the ’60s model. That is, of course, aside from the size and the colourway. The Captain Cook in our hands features a green sunburst finish that may look differently depending on the lighting. On one hand, you might view it as light green, but flick your wrist a little bit and you’ll get an almost-black dial.

The Rado Captain Cook DNA is also obvious with the hour markers and the set of hands. In particular, it is filled with thick rectangular indexes that stay true to the original. Although the date window lacks the cyclops, it still comes in a bright red font colour that complements the green dial. And lastly, you also get the same “Captain Cook” font that gives it a hint of a retro vibe.

If Rolex has the cyclops and Chopard has the dancing diamonds, then Rado also has something that it can call its own, and it is the swinging anchor. Just below the 12 o’clock position is a small anchor that rotates. While it doesn’t move as fast as a tourbillon, it can still be a pleasure to observe. You also don’t have to worry about getting distracted as it is not obtrusive in any way. 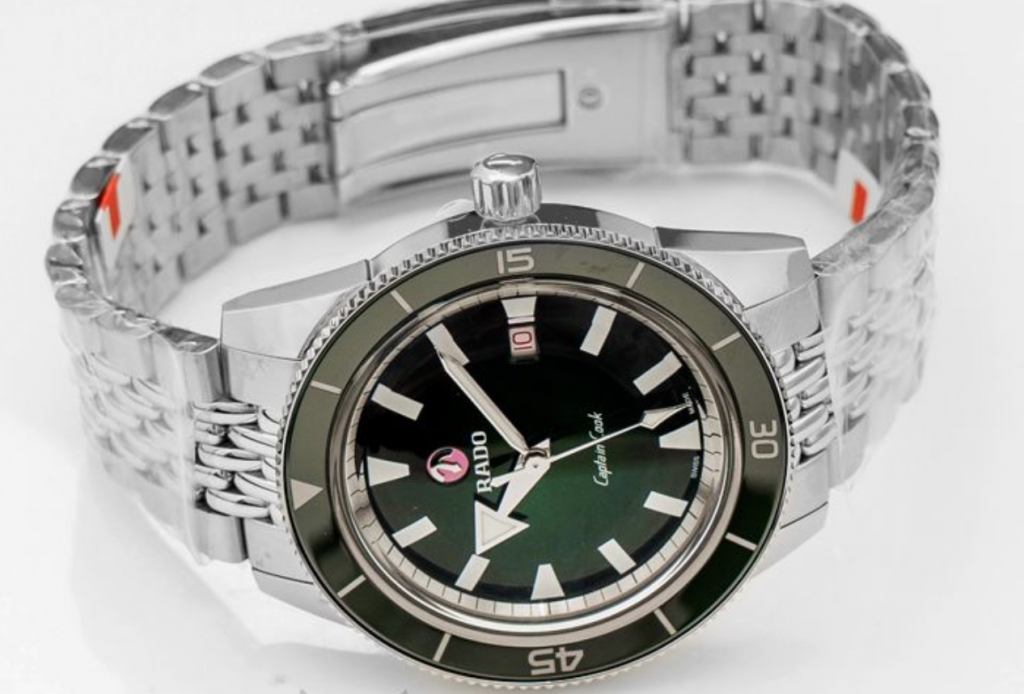 The bezel captures the same feel as the retro version. It has the same sloped shape, the same markers, and the same font. Furthermore, it rotates in 120 clicks and in one direction only. As for durability, it is nice to know that the bezel is made of ceramic. Not only is it similar to the previous Rado models, but it is also resistant to scratches.

Overall, Rado definitely hits the sweet spot when it comes to the bezel. Apart from being functional and robust, it is also aesthetically pleasing.

The new Rado Captain Cook uses a movement called the ETA C07.611. This calibre is related to the ETA 2824-2 movement, which makes it similar in specs except for a few modifications. For instance, the C07.611 trades a slower frequency of 3Hz for a longer power reserve of 80 hours. The lower frequency rating should not alarm you as it doesn’t make the movement less accurate. This is thanks to the modern materials used within the movement. 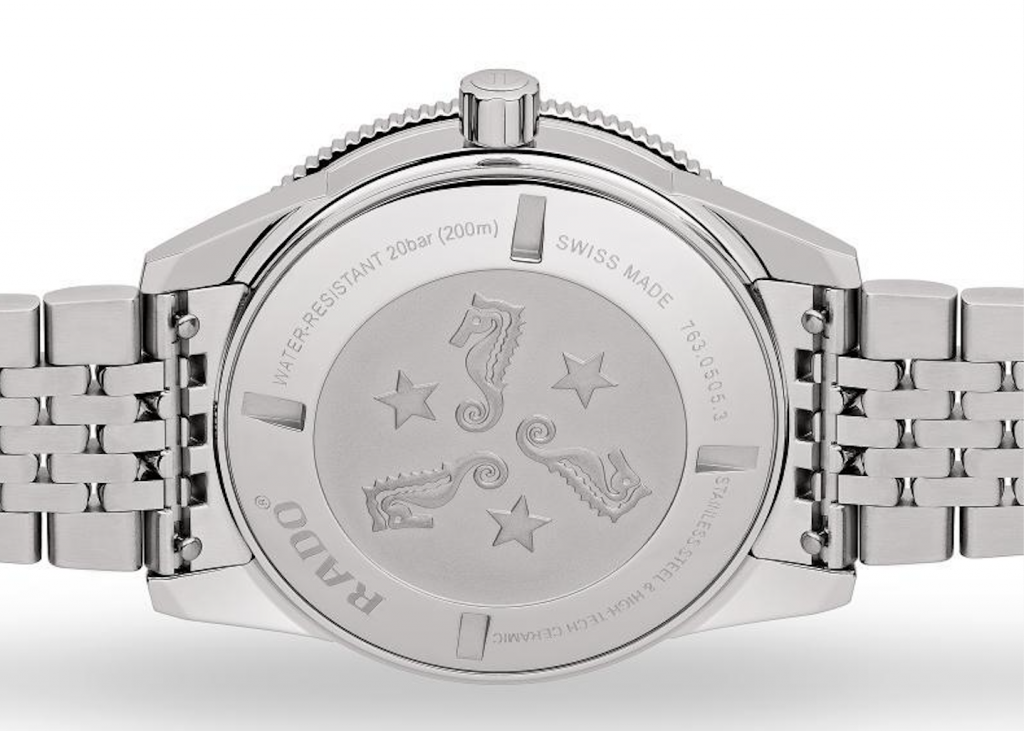 The Rado Captain Cook’s caseback does not show off its movement. However, the backside is still a treat to look at. Case in point, it has an engraving of the “revolving seahorses and stars” design that can also be seen in their older dive watches. This simple drawing brings a bit of nostalgia to the wearer.

As mentioned above, this watch is very comfortable to wear. Some part of it is because of the dimensions. But another factor is the “beads of rice” bracelet. In this style, smaller “rice grain” links are in the middle, while larger links flank it on both sides. The bracelet also becomes slimmer as it goes away from the lugs, making it more comfortable.

The same slim profile can be found in the deployant clasp. While it looks very similar to the ones found in vintage models, Rado assures us that the new clasps are better made. Lastly, the Rado Captain Cook uses the quick release system. This means you can instantly change the bracelet to your liking without using any tools.

Other Versions of the Rado Captain Cook 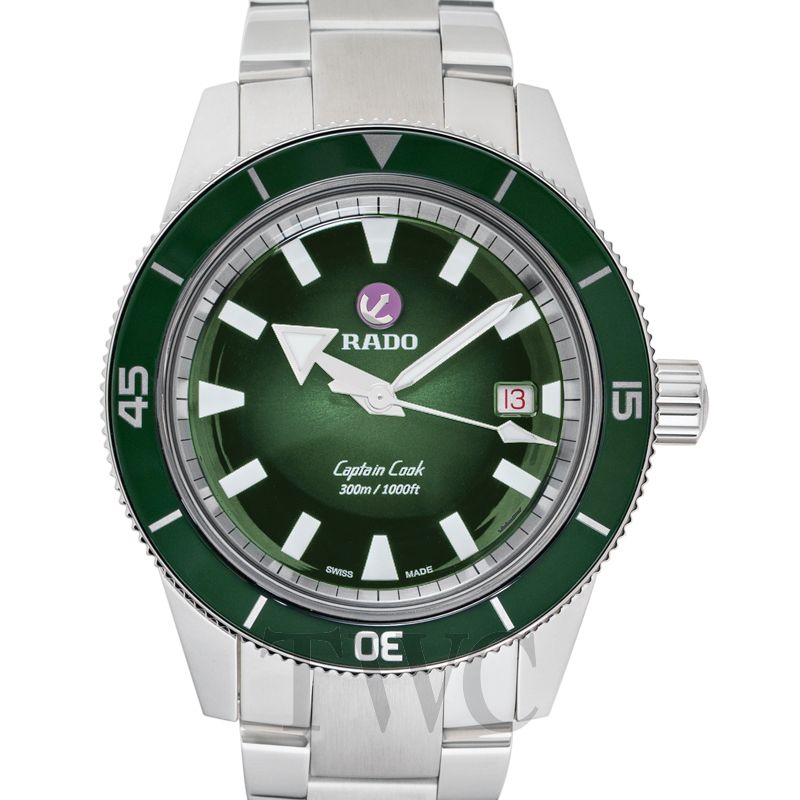 The Rado Captain Cook Hrithik Roshan Special Edition almost looks exactly like the one featured in this article. It has the same green dial and the sloped bezel. However, if you look closely, you would notice that there’s an extra text that says “300m/1000ft” at the bottom of “Captain Cook”. It points out the main highlight of this special version — it can withstand 100m more than the standard Rado Captain Cook.

Moreover, this watch is the product of Rado’s first-ever collaboration with the Indian actor. And some of the profit from this watch will proceed to the Akshaya Patra Foundation. It is a non-profit organisation that aims to help kids cope with the current COVID-19 crisis by running school lunch programs across India.

With its upgrades to materials and water resistance rating, the Rado Captain Cook Hrithik Roshan Special Edition is perfect for modern explorers. 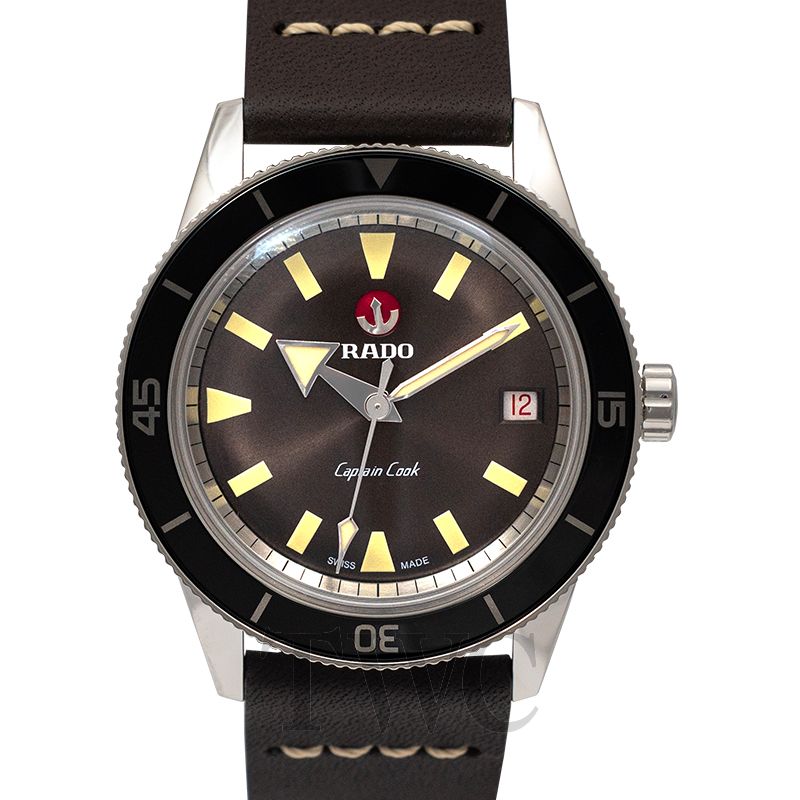 For folks who want something that’s true to the original, the Rado Captain Cook Brown will not disappoint. As mentioned earlier, Rado decided to modernise some of the Rado Captain Cook models by giving them a bigger case. However, this one retains the small 37mm measurement, making it perfect for those with slim wrists or vintage enthusiasts who prefer the small watch trend.

Its similarities with the 1962 original model stop at the design. Yes, it looks vintage; however, it feels modern with its high-tech materials. In particular, it uses a modern ceramic bezel and a sapphire crystal that are more resistant to scratches. Furthermore, it runs on the Swiss automatic C07 movement that spouts up to 80 hours of power reserve.

All things considered, this is the model to pick if you’re a vintage watch purist. From its size to the design elements, this edition captures the retro essence of the ’60s models. 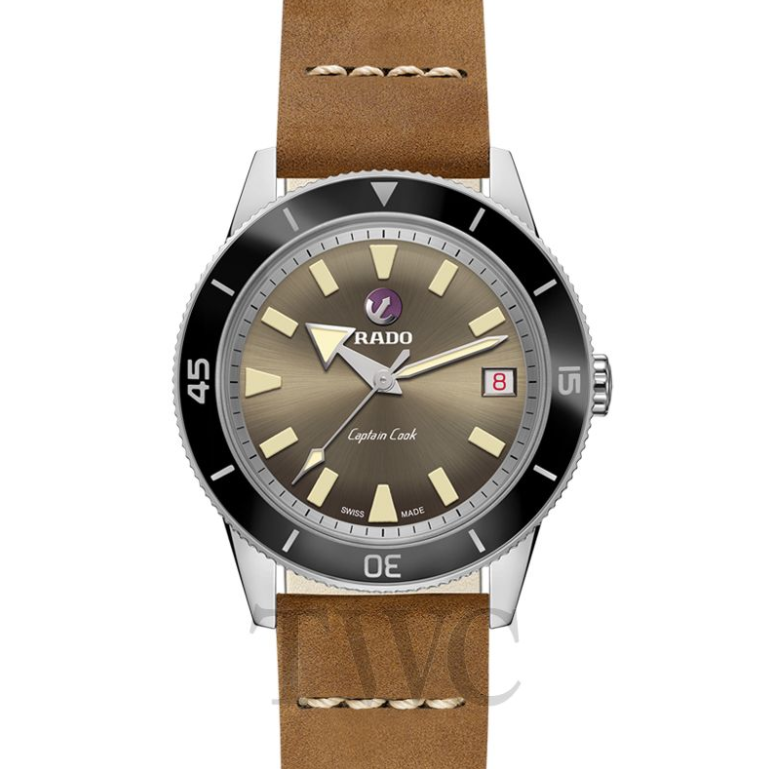 Similar to the previous model, the Rado Captain Cook Hyperchrome has a smaller size. To be specific, it measures 37.3mm in case diameter. Apart from that, it still has vintage details like the curved sapphire crystal which is rare to see in its price point. Similarly, it boasts a sunburst dial that can transform from charcoal grey to dark brown depending on the lighting.

Another interesting point is its faux patina on the hour markers. Pair it with the dark brown leather strap and it looks like a watch that’s been in the hands of a ship captain or an explorer in the Caribbean region. Inside, the watch is upgraded with modern equipment. The movement, for instance, can power the watch for up to 80 hours.

Lastly, what makes the Rado Captain Cook Hyperchrome more special is that it’s limited to only 1,962 pieces. This is in homage to the year that the Captain Cook was released — 1962.

Why should you get the Rado Captain Cook?

Although it is not as popular as the other dive watches, the Rado Captain Cook certainly has its own charm. If you want something vintage-inspired and unique at the same time, this watch might be up your alley. It has a lot of easter eggs (e.g. the moving anchor design, the inward sloping bezel) that can certainly start a conversation.

The Rado Captain Cook is more of a vintage-inspired modern watch, rather than an upgraded vintage watch. While it does resemble the ’60s originals, there is no doubt that the materials and movements used are ages ahead of the previous models. That being said, this watch has the accuracy and durability that will make every explorer proud.

Have you ever wondered how the Seiko’s Kinetic technology works? Check out our comprehensive guide.