Omega Railmaster – A Must Buy For Watch Lovers

Ranked among the top 20 luxury watch brands of 2019, Omega is an established watchmaker that has made several celebrated timepieces. In fact, the Speedmaster Professional (“Moon Watch”), Seamaster Professional 300m (“Bond Watch”), and Speedmaster Day Date MK40 Triple Calendar are among the most popular Omega watches on Instagram. But what about the rest of the lineup?

Today, we take on a different direction and explore one of the brand’s more underrated pieces: the Omega Railmaster.

What Is The Omega Railmaster? 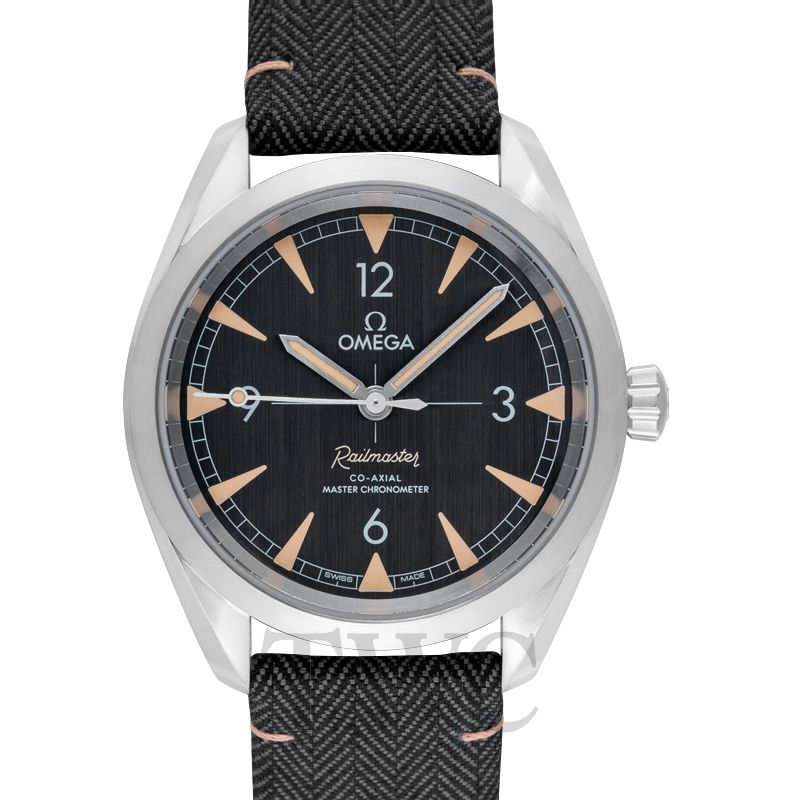 With over 60 years of history, the Omega Railmaster is a watch ahead of its time. In fact, railroad companies and Omega enjoy a long and enduring relationship.

While the term “tool watches” typically brings to mind watches used for diving, the Railmaster is special. Its design serves a vastly different purpose: to aid railroad workers in their line of work. Magnetic fields, at that point in time, were a great source of disruption for watches.

The CK 2914 Omega Railmaster – AKA the very first Railmaster – featured a Faraday Cage as its inner case. Additionally, it had a dial thicker than that of the average watch, preventing disruption caused by outer magnetic fields.

The original Omega Railmaster provided protection from magnetic fields of up to 1,000 gauss, which is the equivalent strength of strong iron magnets or weak electromagnets.

Contemporary Railmasters offer protection of up to 15,000 gauss, and are perfect for use in laboratories.

What Are The Key Features Of An Omega Railmaster? 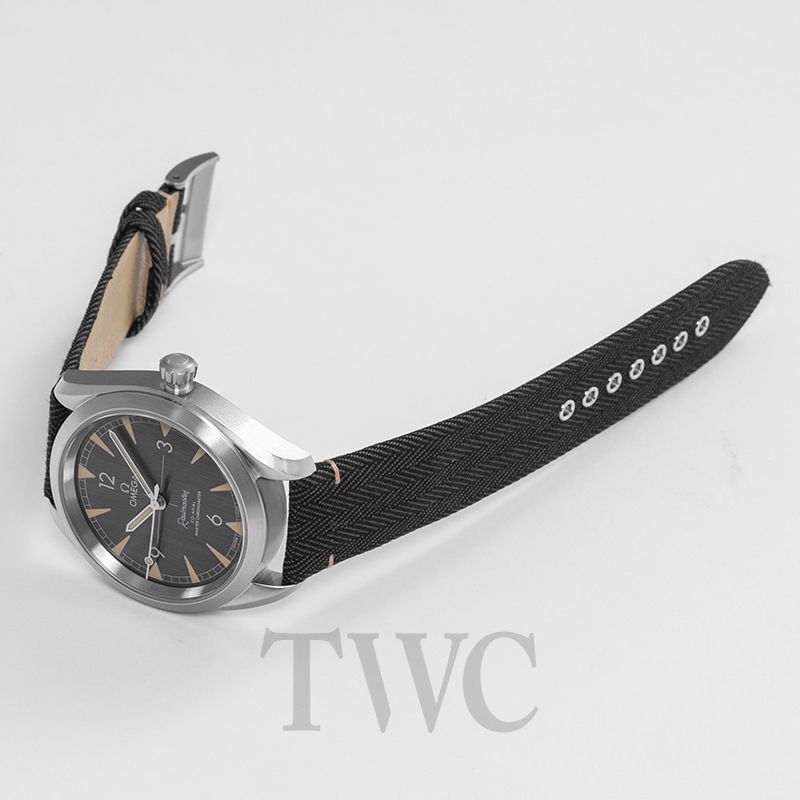 Measuring 40mm in diameter, the Railmaster’s case can resist water pressure of up to 150 meters (15 bar).

With the Naiad Lock system, functionality and beauty go hand-in-hand. Apart from ensuring that the back always fits exactly, the system adds to the watch’s aesthetic appeal.

Thanks to the Master Chronometer Caliber 8806, the modern Omega Railmaster is extremely accurate. Apart from carrying a power reserve of 55 hours, the winding mechanism of the Omega Railmaster also works in both directions.

35 jewels make up the entire movement. Although the movement cannot be seen, all of its details – red-filled lettering, a rhodium-plated finish, etc. – are crafted carefully.

True to the reputation of its brand, the automatic movement runs very well. Not only does it fulfill the highest standards of precision, it is also high in terms of rate accuracy and magnetic field resistance.

As a 4-year warranty comes with your Omega Railmaster, you can rest assured knowing that you’re in good hands. The Railmaster boasts 2 certificates: a COSC (the Official Swiss Chronometer Testing Institute) certificate, and one issued by Swiss national metrology institute METAS.

The latter is proof that the Railmaster exceeds the COSC’s quality level. It also means that the Omega Railmaster is able to withstand strong magnetic fields (max. 15, 000 gauss).

How Much Is An Omega Railmaster Worth?

At the higher end of the spectrum sits pieces such as the XXL 18K Red Gold Limited Edition 49.2MM. The XXL 49.2MM sells for a hefty USD $13,691.40. It boasts a gorgeous red-gold casing, a crocodile skin bracelet, and anti-reflective, scratch-resistant sapphire crystal.

The PAF Railmaster is different from other versions of the Omega Railmaster. Omega’s signature seahorse emblem features an engraving of the letters ‘PAF’. Its dial is also a curious shade that lies between bronze and khaki brown.

Why Did Omega Discontinue The Railmaster?

Despite a promising concept, Omega discontinued the series in 1973, merely 6 years after its launch.

Profitability is the most probable reason here. Although it had technologically-advanced features, the Omega Railmaster did not sell well.

Apart from lack of sales, some speculate that the discontinuation happened due to the lack of a date window. Date windows are useful for quick referencing on the go. They feature on highly rated watches such as Tudor’s and Patek Philippe’s.

More crucially, there was also the issue of a mismatch in supply and demand. In an age of typewriters and manual transmissions, the anti-magnetism function of the Omega Railmaster was useless to most people.

With that being said, limited editions of the Omega Railmaster are released every few years. The watch is, therefore, arguably still relevant in today’s context.

How Do I Know If My Omega Railmaster Is Real?

These are some ways to verify the authenticity of your Omega Railmaster:

• Words should be spelt correctly and evenly spaced on the dial. Spelling or engraving mistakes may indicate that a Railmaster is fake. • Because they are designed with Swiss movements, the second hand should not stutter nor emit any ticking sound. • Look at its dial — the Omega logo should be a separate piece of metal attached to the dial, and not painted on. 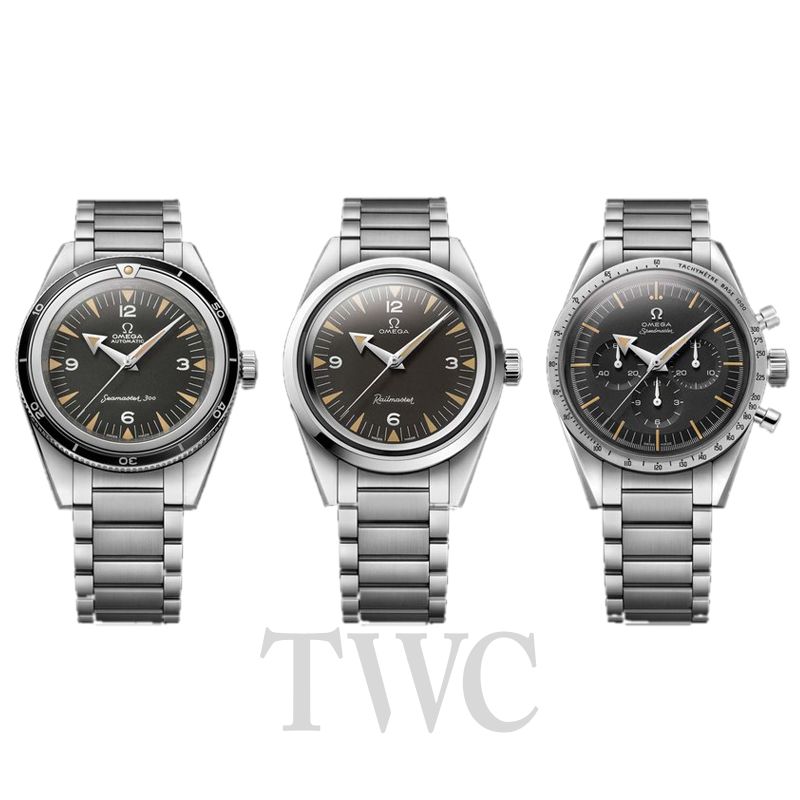 Limited editions of the Omega Railmaster – such as a refreshed version of Railmaster 1957 in Omega’s 1957 Trilogy – are released from time to time.

Past and present meet in the 2017 anniversary rendition of the Omega Railmaster. In this model, the design of the original Omega Railmaster is spiced up with many subtle but significant nuances.

Still using the familiar Caliber 8806, the ‘17 model cleverly blends a vintage look with modern Master Chronometer technology. The end product? The best of both worlds.

As one of the most coveted watch brands, Omega does the concept of  “special” well. For proof of that, just take a look at its denim limited edition of the Omega Railmaster.

Released last year, the Omega Railmaster Chronometer Denim Blue (USD $4,864,05) is aesthetically appealing, durable, and thoughtful to boot. The use of denim is meaningful as it pays tribute to early American pioneers.

If this Omega Railmaster is anything to go by, far from being dead, we say denim is here to stay.

If you’re looking for a premium watch that can be proudly touted around, look no further: the Omega Railmaster is your answer.

While not as flashy as some other watches, timeless design and excellent workmanship make the Omega Railmaster a reliable companion for all occasions.

A watch that can withstand the test of time, the Omega Railmaster is a masterpiece — truly one of a kind.

If you’re curious about Omega’s history, check out our post on the Omega Symbol!