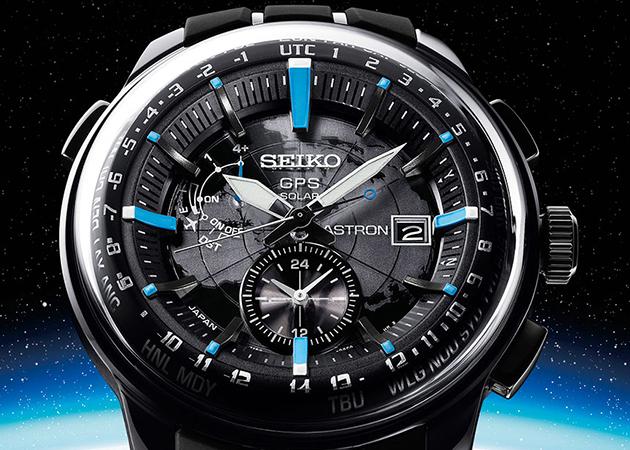 With the release of the Seiko Astron GPS in 2012, a new type of technology was introduced, one that was mind-blowing and astounding.

The GPS Solar is a technology that essentially catches a signal from a satellite radio more than 20,000 kilometers up in the sky. This allows you to access the exact time of the day wherever you are in the world.

As soon as the Seiko Astron receives the signal, the second hand will start to rotate, indicating the wearer that a new signal has been received and that a new time is being set. Its ring-shaped GPS antenna is located beneath its ceramic bezel.

The time can easily be adjusted manually by operating the winding crown. However, given how we all live a fast-paced life, there might not be time to do it yourself.

The creators of the Seiko Astron found a solution for this: If the time margin between manual time adjustments is too long and there is any sunlight, the Seiko Astron will be able to catch the electromagnetic signal from the satellite and set the time by itself.

The purpose of the Seiko Astron GPS is to eliminate any time-related problems while traveling. No matter where you are on the planet, the creators of this marvelous timepiece wanted to give you a tool that could help you tell the time correctly — whatever timezone in whichever city. With this in mind, let’s look at some of the other functions that this model has to offer.

Features of the Seiko Astron GPS

In case of gloomy, cloudy days, the Seiko Astron GPS will set the time once a day so that wearers will never have to worry about having their wrist watches displaying the wrong time.

In addition to this very unique feature, the Seiko Astron is solar-powered, so you’ll have to expose it to sunlight (or any other light source) to charge. With this feature, it surely is no surprise that the Seiko Astron gets its name from the Greek word for star, “astron.”

The Seiko Astron GPS recognizes all of Earth’s 39 timezones, making it the best watch of its kind. It automatically attempts to connect with a GPS signal once a day. Either sunlight or a strong source of light triggers this function.

It also features a DTS function which the wearer has to manually turn on or off. You can locate the DTS setting display positioned at 9 o’clock.

The Seiko Astron is also intricate and well-designed. The super-clear coating glass, Zara-scouring finish case, as well as a carefully finished index, combine beauty with luxury for the ultimate design. Although the face of the watch displays a lot of its features, the Seiko Astron does not give off a chaotic or messy look at all.

The Seiko Astron GPS can be used for much more than just for hobbies. It is especially valued highly not only by those in the business and finance sector but also by celebrities and various athletes.

Basically, anyone who travels often needs this timepiece in their lives. Whilst the current model is only for men, this hasn’t stopped women from purchasing their own Astron GPS.

As of 2018, there are five kinds of Seiko Astron lineups on the market. For the “Executive Line”, for instance, Seiko worked with two athletes to come up with specialized models in terms of design. Apart from that, the “8X Series” caught the attention of many. It is further subdivided into four different types.

The 8X Series gets its name from the calibre of the movement. This calibre started out as the 7X and was used for the first generation Astron series. Then, in September 2014, the second generation was released and the 8X calibre was born.

Creators of the series downsized various parts and included a power-saving feature. Because of this, the 8X calibre is about 30% slimmer than its predecessor, the 7X calibre. In addition, it features different dial colours such as blue and white which have been added on top of the traditional black.

The most popular Seiko Astron model in the 8X series is the “Dual Time”. As the name suggests, it is possible to display two different time zones with the humongous main dial and the small dial located at the six o’clock position. The “Dual Time” is, so to speak, the base of Astron.

Next on the Astron 8x series is the “World Time”. Among the four different types from the 8X series, the “World Time” has the simplest dial. A brand new model costs 16,000 yen (Tax included) and is widely considered the entry model for Astron. While its functionality is limited, the “World Time” is deeply valued and praised for its simplicity.

The “Chronograph”, which specializes in time measurement, is also very popular. The visibility of the hour and the seconds hand is enhanced, making it easier to check the time at night or in dark places. There are also models where the tachymetre can measure the speed of the bezel. The remaining “Big-Date” is based on the Dual Time model and has an enlarged calendar.

The executive line consists of Dual Time and Chronograph from the 8X lines. But it has been modified with different materials as well as colours. For example, the price of the “Diamond Limited” which has diamonds embedded into the index is close to Seiko’s luxury brand, the Grand Seiko.

Another example would be limited models advertised by a celebrity. Shohei Ohtani, a professional baseball player, and Novak Djokovic, a professional tennis player, both had a model released in 2017. Ohtani’s model cost around $2232 whilst Djokovic’s is priced at $1850.

Now that we’ve covered almost everything there is to say about the Astron series, what are your thoughts about it?